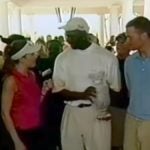 We’ve seen and heard a lot about Michael Jordan lately, by way of ESPN’s popular documentary series about the NBA legend, The Last Dance. We’re about to see and hear a lot about Tom Brady when he tests his golf game in the Tiger-Phil Match II along with fellow NFL star Peyton Manning. But back in 2006, you could have watched both men compete together on the golf course, and, as both athletes often do, win.

It turns out that Jordan and Brady teamed up for the 2006 Michael Jordan Celebrity Invitational, a tournament benefiting charity that Jordan hosted from 2001-2014. If we didn’t already know how fierce a competitor Jordan was, or how much he loves golf, The Last Dance has reminded all of us. But despite that, Jordan has only won his own golf tournament twice in 13 years.

One of those times was in 2006 with the New England Patriots-turned Tampa Bay Bucs quarterback by his side. The pair mounted a two-shot victory over the powerhouse duo of Rollie Fingers and Bill Guthridge (Charles Barkley and Jon Smoltz finished five shots back in fourth place).

On Sunday, Brady shared a throwback video on Instagram of the pair’s post-tournament interview on ESPN, which CBS Boston News reporter Michael Hurley shared on Twitter.

In the interview, Jordan is clutching the crystal winner’s trophy as Brady stands next to him beaming. The two are somewhat reserved, but Jordan adds a classic line before the chat ends.

“It feels good,” Jordan says when asked about winning his own event, “A lot of people are going to say you shouldn’t win, but I could care less what they say. I’m happy that we grinded enough today, we won, and we look forward to winning more hopefully.”

As for Brady, he attributed the win to “Michael’s chipping and putting.” He continued, “We had a great time, he’s a great partner. Whatever you’re playing, it’s always fun to compete and win.”

You can watch more highlights from Jordan and Brady’s win below, and you can catch Brady on the course again this coming Sunday when he competes with Tiger, Phil and Manning in Florida.