At the Memorial Tournament, the PGA Tour confronts a Covid-19 vaccine crossroad 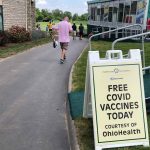 The Memorial Tournament hosted the first-ever vaccine clinic at a PGA Tour event this weekend.

DUBLIN, Ohio — There is a cruel irony in the news of Jon Rahm’s positive Covid-19 test and subsequent withdrawal from the Memorial Tournament, and it can be found no more than 200 yards from the spot where Rahm folded over in shock after PGA Tour officials delivered the news.

It is the OhioHealth vaccine pop-up site, a small, green tent located between the main gate and the short-game area. Before Rahm’s devastating withdrawal on Saturday afternoon, the pop-up site was supposed to serve as the headline in the Tour’s ongoing efforts against the virus. The site is the first of its kind ever to be held at a PGA Tour event, an idea orchestrated and executed by public health officials from the state of Ohio, with approval from Memorial Tournament officials. For three days this weekend, fans have been invited to receive their free, one-shot Covid-19 vaccine at any time during the course of play.

Dr. Genevieve Messick is the site’s medical director, and she’s been on-site for all three days this weekend as a liaison, answering questions for members of the public who might be considering receiving a shot.

“It’s always good to be a source of truth, because now with how fast the vaccines were developed, people have a lot of questions, so we try to give good information based on clinical evidence,” Messick said. “Our team got together and said, ‘What can we do where we’d see a group of people?’ and I said, ‘How about the Muirfield Tournament?'”

Messick says the site has administered roughly 20 vaccines per day, including one to a PGA Tour caddie. The pop-up clinic comes as the PGA Tour — and the nation as a whole — begins to move past a vaccine inflection point. The number of daily doses administered throughout the country has steadily dropped from earlier in the spring, and the pace of vaccinations has slowed noticeably. The Tour has offered vaccines to players for several months and has incentivized those who undergo a full vaccine course by lifting many of the restrictions required of unvaccinated players. A spokesman for the Tour shared Saturday that “north of 50 percent” of pros are fully vaccinated, and that number is expected to grow.

“We have strongly encouraged our players, our caddies, our staff, and anyone involved with our competition to be vaccinated, and we have presented educational materials and resources to educate them on that, completely understanding that it is an individual choice,” said Andy Levinson, the Tour’s senior vice president of tournament administration. “We just want to make sure that people have the proper facts, the unadulterated facts related to that. We have also been out quite a bit at Tour events having one-on-one conversations with people who have questions about the vaccine and are hesitant. And our advisor has been out every week for the last nine or t10 weeks or so doing just that, having one-on-one conversations and that’s I think been extremely helpful. So we have strongly encouraged but not mandated.”

But those restrictions on unvaccinated players are set to expire at the end of June. Under the new rules, Rahm — who tested positive only after entering the PGA Tour’s contact-tracing protocols for confirmed close contacts — likely would not have needed a test until he began presenting symptoms, which could have expanded the risk of infecting others.

This is a particularly prescient point given the makeup of those who have not received the vaccine to date — a group Messick says is uniquely in need of motivation, and affected by convenience.

“Initially, there was a group of people who wanted to get the vaccine and they all came early on, but what we’re seeing now is there was a group of people who weren’t really opposed to getting the vaccine, but it had to be convenient,” she said. “It was a younger population, they’re busier, they don’t have much free time. So the strategy has changed now to make it as convenient as possible. To take the vaccine to where people are.”

In the aftermath of Rahm’s asymptomatic positive test, it’s fair to wonder whether the Tour rule changes could disincentivize the vaccine process for the group of unopposed but still unvaccinated. After his round with Rahm on Saturday, Patrick Cantlay said since he already had Covid, he didn’t feel “too concerned.”

“Obviously it is somewhat of a concern, but I got to imagine that I had it earlier this year, so I’m feeling pretty OK about it.” Cantlay said.

Perhaps Rahm’s positive test will be what it takes to convince a large swathe of the PGA Tour’s vaccine holdouts, but if the golf public is any indication, the early returns at Muirfield Village haven’t been promising.