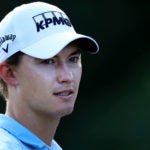 Maverick McNealy has been making the most of his time away from the course.

I had to ask Maverick McNealy: What was his biggest vice? Did he have one?

During our three-part series of interviews, this was the only time he looked lost for an answer. “I love ice cream. I don’t know. I love board games,” he said, searching. He stopped to clear his throat. “Mario Kart on the Wii with my roommates? I’m a very simple guy — I love that stuff.”

Simple pleasures, maybe. But there’s no mistaking McNealy for a simple guy. The 24-year-old stands out among Tour pros as someone uniquely driven, both on and off the course. Maybe that’s why the Las Vegas resident has no problem staying away from the casinos on the Strip.

“I don’t know, I gamble on myself for a living so I don’t need to take on any more risks,” he said.

Instead, McNealy has been using his time away from the game in more directed ways. Along with ice cream, board games and Wii, he’s learning Korean. Already “pretty fluent” in Spanish, the Stanford grad has been tackling another language from quarantine.

LPGA star Danielle Kang, McNealy’s girlfriend, was the inspiration behind his efforts to learn a new language. English is Kang’s second language after Korean, and she’s fluent in ASL (American Sign Language) as well.

“We were talking the other day — we have plenty of time to talk when there’s nothing else to do — and she asked me a question,” McNealy said. “She asked, ‘What do you want people to know about you when you’re gone?’ And I said that if there’s one thing that I want people to know it’s that I respect everybody, I want to show that respect and I will treat everyone with the same respect, no matter who you are, unconditionally.”

One of the best ways to show respect, McNealy said, was to broaden his cultural horizons. He downloaded language learning app Duolingo to his phone and has been learning the Korean alphabet. He can sound out words and has been using a flashcard app on his phone, too — plus he’s gotten some coaching from Kang, who gives him a word of the day.

“My quarantine gift from Danielle was a stack of Level 1-5 Korean textbooks. So I’m working through level 1 right now.”

But McNealy made it clear that Kang doesn’t just improve his knowledge base — she brings him out of his shell, too. He explained more in the video below.