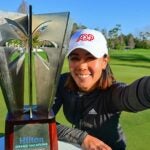 Danielle Kang on Sunday after winning the Tournament of Champions.

Danielle Kang, in her first press conference of the new LPGA Tour season, was minutes into the questions and answers when a reporter wondered about a comment she made from the last event of last year. It was there, at the CME Group Tour Championship, where Kang was asked about playing “a place where you feel comfortable,” and she answered: “Oh, I don’t feel very comfortable” and gave her reasons.

All of which led to this follow-up exchange last week:

“At the end of last season, you said you were feeling uncomfortable. Where is your comfort now to start 2022?”

“I’m always uncomfortable,” Kang said. “I have to get comfortable being uncomfortable, as my brother says. I’ve done some really good work this offseason. I’m happy with the progress, but I’m not where I want to be yet.”

Here’s how she won that battle. And eventually her first tournament since 2020.

Danielle Kang’s tip for ‘being comfortable being uncomfortable’

Before we begin, back to that first press conference. While acknowledging that it’s, as she said, a work in progress, the progression was noticeable, as we saw. So we must know: Just how does one become comfortable being uncomfortable, Danielle?

“Probably reps, and I actually have a sports psychologist named Micah, and he actually helps me really check into the present moment,” she said. “I’m always uncomfortable. We’ve figured that out.

“But trying to have that second or two seconds of just comfort and bringing back to the present moment is something that I work on every day. I slept over at Amy Yang’s house last night. I’m going to throw her under the bus because she made me meditate and stare at nothing for 20 minutes yesterday.

“That was different. I go, 20 minutes? What? So I just — she made me sit there. Took my phone away, everything. I just — I don’t know how she does it, but things like that I have to work on.

“Did you feel better after that?” a reporter asked.

The meditation would pop up again.

How Danielle Kang dealt with a crack from a fan

Round one, Kang shot a four-under 68. In Friday’s second round, she was a stroke better and did so without a bogey — which, she admitted afterward, she learned only after she was asked about it. Turns out, after she holed out a shot, she was reminded by a fan that she hadn’t been putting well that round, and Kang believed one of her best shots was the one she didn’t take in response.

“So today I guess I was bogey-free, but I missed so many putts on the front nine, but tried not to think about it and I dropped it as quickly as I can,” she said. “I ended up holing out one, and I think maybe the gallery said to me, ‘Maybe you’ll learn how to read a putt now.’

“I said, ‘Oh, OK.’ Normally it would bother me, but I just go, ‘Oh, OK,’ and then you drop it and have the next thing to focus on. Things are going to happen that I’m not going to like, but just going to have to keep moving forward. That’s the most difficult thing that I’m working on.”

A reporter then noted that “golfers can be very results oriented,” Kang agreed, and the reporter then asked: “When you’re not as much, does it lighten things a little?”

“A little bit,” Kang said. “I’m not going to say I don’t care about the result. I definitely do. But trying not to focus on the result during the process of what I need to do to get to the result. I still need to somehow get there.

“Yeah, it’s hard. Golf is a hard sport or game, whatever you want to call it.”

How Danielle Kang, who doesn’t like to play in the cold, played in the cold

Round three, Kang shot a 69, and she did so in what we’ll call Florida cold. No, it wasn’t 30 below and snow, but a windy, 50-degree day isn’t what you sign up for when you go to Orlando, either. And for Kang, who also lives in the desert of Vegas, it was coat weather.

“I don’t perform quite well in the cold,” she said.

So she layered up. To keep the blood pumping, she did jumping jacks. She played when it was brisker in Sin City, too. It also turns out that her caddie, Olly Brett, who’s from England, has wanted his boss to one day win the Women’s Open across the pond, where it can also be, yes, windy and 50.

“My caddie’s dream is for me to play well at the British, so I — yes, my history at the British Open is not so great. I get that,” Kang said. “He’s been on my bag for five years. Least I can do is be able to be prepared for the cold weather. So during the offseason, it’s being able to try and swing with how many layers I have on, what’s the max, what I’m capable and not capable of doing. There are certain shots I can’t do, shots I can’t hit during the cold weather, and I just take them out of my arsenal.

“Those are the things I have to figure out.”

As promised, more meditation. Also during the third round, there was a backup on the par-3 13th at Lake Nona, and what better time to collect your thoughts than that?

“Just a lot of time,” she said. “I just wanted to — the word “meditation” throws people off. I guess it’s just getting back to the present and thinking about what’s going on around you more so than what’s going to happen, what has happened; thinking about should have, would’ve, could have.

“It’s something that I’ve been working on so it’s good.”

Round four, Kang shot a 68, finished at 16-under overall and won by three. Still, no round is without its errors, and, on the par-4 16th, first she was putting from 100 feet away for par, then she ran the putt by.

Kang made the come-backer.

“So I hit the putt, first putt really firm. It was over 100 feet, and then I watched it roll by the hole. So that was important for me. So instead of freaking out about or panicking about the results — what if I don’t make a bogey; what If I don’t make a double — I was more focused on what I needed to do the best I can to hit the next shot with 100 percent commitment, which was to watch my putt, and I trusted that line, and I made that bogey, so I was really proud of myself.”

And then there were the unforced errors. On the par-5 11th, she hit “a really good wood” off the tee, only to have “a really crummy lie.”

She birdied the hole.

“I quietly said to my caddie, I’m raging right now,” Kang said. “Because it could have been anywhere; why here? I said, It’s fine. Just let me rage, just let me get angry for five seconds, and then I dropped it. I knew I could hit that shot. I practiced it during the practice rounds and gave myself a really good up and down.”

Chirps from fans, poor weather, slow play, bad shots, bad lies — and a tournament title. Comfort in the uncomfortable, indeed. At the end of her winner’s press conference, Kang was asked: “Is this win on that note mean more to you because it is in the cold and in the wet and in the windy with Ollie? Does it mean something a little bit more special?”

“I think it’s more special because a lot of stuff that I did during the offseason; it was really hard,” Kang said. “I mean, I’ve actually gained nine pounds, so I worked really hard to gain that weight.

“I feel really good. I don’t feel injured, tired. Those are the things that I worked on doing, a lot of different types of analysis and people helping me out. I have a great team back home. They’re probably not going to listen to this, but Nicole is my nutritionist, I got my mental coach, I got Duncan with my strengthening, Heather with my physio. It’s just nonstop with all these groups of people building and helping me better, like create better footing.

“So those are the things that it’s hard to do, so it’s — I’m just more proud of myself that I actually did it.”