How this pro could improve his putting stroke — through dental equipment 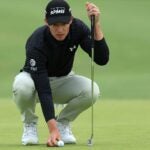 Maverick McNealy lines up a putt on Saturday on the 1st hole on the South Course at Torrey Pines.

Maverick McNealy had aced the 8th at Torrey Pines when he revealed how his shot was even more rare. Not only had he made a hole in one during Friday’s third round of the Farmers Insurance Open, but he had done so on a day when about 30 family and friends were stationed around the green. Talk about perfect timing.

“My uncle is a dentist in town, and the dental office took the day off and they were all there watching so it was really, really fun,” McNealy told announcer Amanda Balionis on the CBS broadcast.

“I guess watching holes in one is better than pulling a few molars out,” analyst Nick Faldo said.

“That’s a nice way to treat your family and friends,” announcer Jim Nantz.

Turns out, McNealy was just paying back a favor.

After his round of 67, which had moved him up to a tie for eighth entering Saturday’s final round, he told reporters that he was “wanting a way to like grip my putter consistently like a grip trainer.” And he knew that his uncle, Bob Randolph, was a dentist. And he remembered that dentists have “that stuff they use for impressions.” So …

And now his putting-trainer hack is in the hands of his club manufacturer.

“So the Callaway guys have it. We’re going to scan it and like replicate it, just have it as a grip trainer,” McNealy said. “It’s great because I’m playing great this week, so I want to remember how my hands go. It’s just a funny cross-section of dentistry and golf.”