Matthew Wolff is showing us something strange about fairways 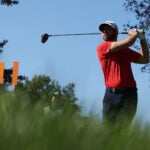 Matthew Wolff hit just 2 of 14 fairways on Saturday and shot the low round of the day.

MAMARONECK, N.Y. — The conventional wisdom is that isn’t supposed to work this way. Winning the U.S. Open requires hitting the fairway and then hitting the green from there. The guy who keeps his ball out of the gutter is the guy who will survive the test the best.

But on Saturday, free-swinging wunderkind Matthew Wolff shot 5-under 65, the best round of the day by two shots, to leap into the 54-hole lead, also by two shots. Oh, and he hit two of 14 fairways in the process.

Lee Westwood, who is 10 shots behind, marveled at Wolff’s performance — in a backhanded way. “12 fairways after 54 holes,” he wrote on Twitter. “That is incredible to be -5 after 3 rounds. This tournament used to be about hitting fairways and greens.” We know it did, Lee. Westwood has hit 20 fairways of 42. The field is hitting only about 40 percent of its fairways, so his mark is quite good. These fairways are tough to hit.

What do we make of it? What do we know, definitively?

First, we’re reminded that fairways aren’t everything. Hitting the fairway is essentially shorthand for “giving yourself the best chance to hit the green,” right? Well, guys like Wolff and DeChambeau are finding another way to give themselves that chance: by hitting the ball very far. It’s much easier to hit the green with a wedge from the rough than a 7-iron from the rough, and they’re taking full advantage.

Second, the setup matters. The rough at Winged Foot is graduated; it’s shorter near the fairway and then gets longer. The short rough is quite playable; Patrick Reed actually hit a wood from the rough on No. 9 on Friday, while DeChambeau and Wolff have each made a bunch of birdies from the same stuff. It’s not a binary between “fairway” and “rough,” even though the stats make it look that way.

Third, Winged Foot itself may actually be uniquely situated to cater to fairway-missers. There are very few forced carries on approach shots, and you can run the ball up onto nearly every green on the course. If you’re strong enough and have a clear line to the front of the green, you’ve got a chance to hit that green.

The leaderboard and setup raises a fascinating question: If the fairways are this difficult to hit, does that end up neutralizing the advantage of accuracy and ultimately favor big-time bombers? In other words, would slightly wider fairways actually favor more accurate golfers? It’s hard to tell for sure, because bombers always have an advantage. But as golfers continue to hit it longer and classic U.S. Open courses continue to try to protect par with tight fairways and long rough, it’s a debate that will continue.

“I feel like even though I missed the fairway, there was a lot of times I was in that graduated rough that’s a little shorter,” he said. “There’s a lot of holes out there that maybe people would try to hit it in the fairway or maybe take the safe play because it is a U.S. Open and they know that pars are a good score, but I don’t really like to think of it that way. I like to go out there and do what I feel comfortable with, rip dog and see how it goes from there. I feel comfortable with every part of my game so I don’t like to shy away from things when I’m feeling confident, and I’m probably going to do the same tomorrow.”

He’s hit on the real lesson here, I think: We may have the dichotomy of “risky” versus “safe” completely wrong. On the professional level, there’s not much safe about hitting it short — even if you’re hitting it pretty straight. Unless you can hit it as well as Brendon Todd, it’s actually far safer to be a big hitter. But you have to be a big hitter and everything else, too. That’s easy to forget.

When asked what’s working particularly well, Wolff made that clear. “Everything,” he said. “I think my putting was by far the best it’s felt in the last two or three months. I feel like I’m really hitting the ball well. My irons were really good, and even though I only hit two fairways, my driver was — it was just barely off, but that’s the U.S. Open.”

Wolff is second in the field in strokes gained around the green. He’s fourth in strokes gained approach, even though he’s typically a Tour-average irons player. And he’s gained 3.66 strokes on the green, too. In other words, hitting fairways is unnecessary — as long as you drive it far, miss those fairways in the right spot, scramble like crazy and ride a hot putter.

The bomb-and-gauge era is here! But that doesn’t mean it’s easy to bomb and gauge.