Masters third round suspended due to weather warning at Augusta National 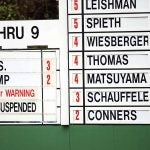 Play was suspended on Saturday at the Masters.

The third round of the Masters was suspended on Saturday afternoon due to dangerous weather entering the Augusta, Ga., area, and play will resume on Saturday if weather allows.

An official approached the final pairing of Justin Rose and Will Zalatoris on the 7th green to tell them the news, and the horn was sounded seconds later, at 3:58 p.m. ET. As stated by CBS on-course reporter Dottie Pepper, the horn that sounded was for a dangerous suspension, which does not give players the option to finish a hole before leaving the course. All players were instructed to mark their balls and evacuate the course. Patrons were asked to leave as well.

Rose, the 36-hole leader, is still out in front. He’s seven under through six holes, one ahead of Zalatoris. Justin Thomas, Hideki Matsuyama, Corey Conners and Marc Leishman are all tied for third at five under.

Jordan Spieth is among a big group tied for seventh, at four under. Right before the horn sounded, Spieth rebounded from a double on the 7th hole with a birdie on 8.

This post will be updated when more information becomes available.