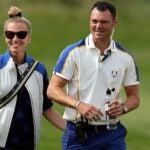 Martin Kaymer plans to take an extended leave from tournament golf when his baby is born.

Martin Kaymer, a two-time major champion and the world’s 118th-ranked player, is not only expecting his first child soon, he also plans to step away from the game for a significant period to settle in with his new addition.

According to an interview Kaymer gave to a German golf magazine (reported by the Associated Press), Kaymer and his partner, Irene Scholz, are expecting a baby in January.

“Our child will be born in Germany and I won’t play any tournaments for three months and only start again in March,” Kaymer told the magazine.

Scholz, who is also German, is fitness enthusiast and former Peloton instructor, and accompanied Kaymer to the 2021 Ryder Cup at Whistling Straits, where Kaymer served as an assistant captain to Team Europe’s Padraig Harrington.

Kaymer has straddled both the PGA Tour and the European Tour for the majority of his career — a difficult prospect when you have a family.

That’s why, once his child is born, Kaymer says he wants to live in Florida. “Commuting between America and Europe just hasn’t worked for me,” he said.

Kaymer has three victories on the PGA Tour, including his majors, and 12 additional international victories, though he hasn’t won on any tour since 2012.