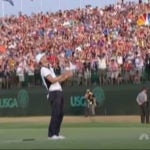 Martin Kaymer turned to a grainy YouTube video for inspiration.

There was plenty to be excited about, of course. It was the eve of this week’s PGA Championship, the first major in over a year and (with apologies to last week’s Barracuda Championship) the first big start for Kaymer since before the pandemic. But as he drove home from dinner in San Francisco, something didn’t sit right.

“I didn’t feel that good. I was not that happy for some reason. I don’t know, sometimes that happens.” It’s worth admiring the simple honesty in those lines; Kaymer is a rare combination of thoughtful and direct. It’s also worth admiring Kaymer’s strategy for turning his week around.

When the 35-year-old got back to his hotel room, he fired up YouTube. Specifically, he loaded up the final nine of the 2014 U.S. Open — a tournament he won by eight shots. Eight! “I thought I needed to lift my spirit a bit,” he said.

The video is about 100 minutes long, but no worries: Kaymer says he generally doesn’t have much to do at night, anyway.

Kaymer admitted that part of the reason for his malaise was a lack of recent competition — and a long run of substandard form.

“I just haven’t played well enough. I mean, it’s very simple. My priorities, they’ve shifted a little bit. I didn’t practice as much as I should have. I didn’t feel as motivated as I maybe should have, also.”

It’s understandable that Kaymer would turn back the clock to 2014, when golf was particularly simple. His stint at World No. 1 was still fresh in his mind. Then he won the Players Championship — and a few weeks later, blitzed the field at Pinehurst. He hasn’t won an event since.

The video has just shy of 180,000 views, but Kaymer insists most of those aren’t from him — before the pandemic, he hadn’t watched a replay of the event in four or five years. But he credited Wednesday night’s viewing with getting him in the right frame of mind as he headed to the par-5 10th on Thursday morning.

“I was thinking if I can start off nicely with a birdie, that would be great,” he said. “Definitely that video from last night, that helped me to believe that my putting was good enough, that my ball-striking was good enough. Even though it’s a few years back, it’s always nice to remember those moments and feel the same that you felt that day.”

Kaymer didn’t birdie the 10th, but something clicked midway through his round: after playing his first 7 holes in even par, Kaymer went birdie-par-birdie-par-birdie-eagle to jump into a share of the lead. He bogeyed his final hole of the day but posted four under 66 to get himself right into the mix.

The performance was buoyed by his putting, which has been a fickle beast in recent years. “It’s very rare to have days like this, but something to build onto,” he said. On the day, he ranked 4th with 3.231 strokes gained on the greens.

Kaymer sounded energized after his round. To be sure, opening a major championship with 66 would energize anyone. But he talked of feeling motivated by the game’s next generation. He hasn’t contended much recently; by world ranking points, just one of his top 20 career starts has come since Pinehurst at 2014. He’s got a long way to go to stay in the mix at TPC Harding Park, but at the 10-year anniversary of his first major championship, what better time to turn back the clock?

“I like to go back to those moments,” he said. “I know you shouldn’t live in the past, but if the past can help you in the present moment, I’ll take it.”