An LPGA wedding, a Max Homa impersonator and Joe Burrow tees it up | Rogers Report 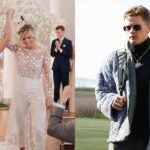 Hello everyone and happy Monday! Morale is high over here. I spent the weekend playing my first round of golf in Rhode Island with my best friend and cousin, which means it finally feels like spring in New England. And then I watched Jordan Spieth win the RBC Heritage on Sunday, which reminded me of my youth when Spieth won all the time. Hopefully we are heading in that direction once again! Here’s what caught my eye on the internet this past week.

Perspective! Jordan Spieth won for the first time as a father over the weekend. And more importantly (just kidding), Jordan Spieth and Easter Sunday have become one of the most iconic duos in golf. As we know, Spieth won the Valero Texas Open last Easter and the RBC Heritage yesterday. Masters Sunday falls on Easter next year, so I’m sending good vibes to Spieth on that front.

Congrats to the 13-time PGA Tour winner, who earned $1.4 million on Sunday. And shout out to the universe, which wanted to keep Spieth humble by having the emcee call him “Justin” at the trophy ceremony. Hey, Spieth and Justin Thomas are old pals, so you can’t totally blame the guy for mixing up their first names under pressure. Also, is getting a very famous person’s name wrong the ultimate power move? It makes me want to try this at some point.

And because it’s Jordan Spieth, we were given yet another reason to be a fan of his on Sunday.

Always making time for the fans!

We all know Max Homa is the ultimate Twitter jokester, so you can’t blame golf Twitter for thinking he really sent a fan a hand-written note and a printed-out picture of pizza after he asked for some Domino’s last month.

Homa took to Twitter to clear up the confusion, but it made me wonder who pretended to be him and took the time to send a letter as the three-time PGA Tour winner? I can’t decide if I’m more weirded out or impressed. My takeaway is that golf Twitter is as magnificent in its commitment as it is weird.

Mel Reid and Carly Grenfell got married over the weekend in Green Cove Springs, Florida. Reid is a European Solheim Cup hero and Grenfell is a senior content manager for the Korn Ferry Tour, so this wedding could go down in history books at the golfiest wedding of all time. Congrats to the lovely couple!

No, not The Match VI, although I’m excited for that, too! I think I’ve mentioned before that I’m not really a Football Girl, but I’m trying to become one. On the rare occasions that I do find myself interested in it, I always try to find a golf connection. And up until this past week, I couldn’t find any golf-related Joe Burrow content. You’ll see below that I filed an official complaint about it to the internet in February.

So I was very pleased to come across the following post, which featured Joe Burrow on a golf course. Of course, I would’ve liked to see more of Burrow’s game in this clip. What’s his swing look like? His putting stroke? What type of clubs and bag is he working with? But this is all we got.

I did, however, still learn a lot from this short video. For instance, he’s a no-hat guy on the course. He’s also into black golf shoes. And he’s NOT letting some wedding get in the way of his round. Burrow teed it up with his teammate Sam Hubbard, 49ers defensive end Nick Bosa and Devin Booker of the Phoenix Suns. Talk about an A-list outing.

Masters Sunday had McIlroy and Morikawa’s hole-outs from the sand on 18. I’ll see those and raise you Frittelli’s Sunday punch-out from … the Spanish moss?

This shot is wild. First off, I’d like to know how the ball didn’t fall to the ground. I’d also like to acknowledge how good the shot sounded. I struggle to make contact that solid when I’m in the middle of the fairway, never mind hitting from mid-air.

It’s a bummer that Frittelli was penalized for this shot, but even with the penalty I can assure you I won’t soon forget this punch-out.