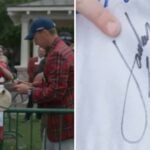 Jordan Spieth made sure to take care of his fans after the RBC Heritage.

Jordan Spieth is one of the most popular players on the PGA Tour, and after his final round at the RBC Heritage, he had a hoard of young fans waiting for the chance to snag some facetime with him.

However, sitting in the clubhouse with a 13-under total, Spieth had a chance for a playoff depending on how the scores in the final few groups came in. With the possibility on the table, he needed to stay ready for the possible bonus-golf.

When he exited the scoring area, Spieth explained the situation to the masses.

“Hey guys,” he said. “So, I’ve got to wait to see if there’s maybe a playoff or not, so I’m going to lay inside and lay low for a little bit, and then I promise I’ll be back here. Just it’s either going to be after a playoff, or if not, if someone else wins, I’ll come back.”

As you likely already know, Spieth did later end up in a playoff to the decide the title. And, pitted against reigning Player of the Year Patrick Cantlay, the three-time major winner prevailed for his first victory in a little over a year.

True to his word, when his winner’s duties were complete, Spieth headed back out to the autograph area. The crowd exploded in cheers when he appeared in his tartan jacket.

“Appreciate you being patient,” Spieth said. “I know it was a while.”

Not only did Spieth earn his 13th Tour victory on Sunday, but he earned some new fans, too.