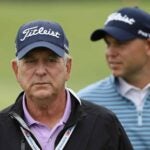 Jay Haas had one question for his son: “Are you sure?”

Bill Haas was. That’s why he asked his dad, Jay, to team up with him at the Zurich Classic team event this week. Bill, 39, has made 12 of 18 cuts on the PGA Tour this season. Jay, 68, has played four out of five events on the PGA Tour Champions schedule. His last PGA Tour start was in 2010.

“Bill asked me to play, and I tried to discourage him, that he needed a partner that could help him a little bit more,” Jay said on Wednesday in New Orleans. “But just being with him out here and being on the same range with him again, looking down the aisles here and just seeing all the great players that we have, so it’s something I’ve been thinking about, certainly nervous about. Yesterday didn’t help me in any way because I didn’t play very well. So hopefully I’ll get better as the week goes on. It’s just fun being here, again being with Bill, getting the adrenaline flowing, and hopefully we can do better than I’m anticipating I’m going to do.”

Bill said that in the last couple of years he didn’t have the status to be able to ask for a partner, but this year, knowing he was in the field, he was able to find his own instead of waiting to be asked.

“I just asked the Tour, can my dad play?” he said. “When they said yes, I just mentioned it to him. We had kind of talked about it, or maybe I had talked about it with other people, about how I thought it would be cool if he played.”

Jay is a nine-time PGA Tour winner and has 18 titles on the PGA Tour Champions.

“I kind of kept thinking, well, he’s going to come to his senses and find Nick Watney or somebody, you know, one of his buddies,” Jay said. “But the more I thought about it, the more I’m loving it. All the guys out here have been great. So many people have said this is unbelievably cool that you’re getting to do that. It seems like I’ve become Pops out here. I’ve heard that a bunch. ‘Hey, Pops, good shot’ and all that stuff. It’s been very cool. Very cool.”

The Haas’ begin their first round at 9:26 a.m. ET on Thursday off the 10th tee. They are grouped with Watney and Charley Hoffman. The first and third rounds of the Zurich are four-ball, and the second and final rounds are alternate shot. Cameron Smith and Marc Leishman are back to defend their title.