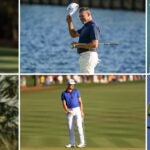 Justin Thomas won the Players Championship — but what else happened in Ponte Vedra?

Justin Thomas hit a solid wedge shot into the first green on Sunday, setting up a 20-footer for birdie to get one shot closer to the lead. No dice: that putt rolled over the edge and he settled for par.

Maybe he felt some desperation; it’s possible that’s why Thomas gunned his birdie putt on No. 8 well past the hole and missed the comebacker. Three-putt bogey.

“I was playing so well those first eight holes and I felt like I was hitting a lot of good putts, I just wasn’t making anything, wasn’t getting anything out of my round,” Thomas said. “I just tried to stay in that same mind frame.”

He succeeded. When Thomas hit a towering 5-iron onto the par-5 9th in two and two-putted for birdie, he accomplished a particularly rare feat: He’d shot even par for nine holes while averaging more than two putts per hole. Put another way: On the front nine Thomas hit 17 shots from off the green and 19 shots on the green. That’s some serious ball-striking paired with a seriously cold putter.

Once the short birdie putt on 9 fell in, the cover temporarily came off the hole. Thomas rolled in a seven-footer for birdie at No. 10 and a 19-foot eagle putt at 11 before making things easy on himself by chipping to tap-in birdie range at the drivable par-4 12th. Those three one-putts in a row were his only one-putts of the day until the 18th, where he technically got up-and-down — but only because he missed the front edge of the green by about a foot.

Justin Thomas’ 2021 headlines began when he uttered a slur to himself on a hot mic in Hawaii. The moment — and the backlash that followed — has unquestionably changed Thomas. I won’t call Sunday’s win a triumph over adversity because that would obscure the fact that Thomas was the one to put that adversity in his own way.

Still, we can avoid a ball-striking-as-redemption story arc while still acknowledging that Thomas has had a lot on his mind of late. His grandfather, who helped teach Thomas the game, died while his grandson was playing the weekend of the Waste Management Phoenix Open. Thomas got choked up after his round thinking of his grandfather — “I wish I could talk to him,” he said — and spoke frankly about working on his mental health.

“I talked to people. I’ve reached out to people,” Thomas said, choosing his words carefully. “I mean, it’s not — I mean, I’m not embarrassed to say that I reached out to talk to people to kind of let my feelings out and just discuss stuff with them. I think it’s something, especially at our level, a lot of people probably think that they’re bigger and better than that, but some of the thoughts and things I was feeling, it wasn’t fair to myself, and I needed to do something, and my girlfriend Jill was very helpful with that and staying on me to make sure I was taking care of myself, like I would want to do for anyone else in my family.

“Yeah, just like I do in my golf, if things are going on in life, I need to work on it to try to get it better.”

We’ve gotten in the unfortunate habit of treating second-place finishes purely as missed opportunities. We do this especially with famous runners-up, like Tony Finau, Xander Schauffele and the Revived Artist Known as Jordan Spieth. So there’s a real joy in seeing someone like Lee Westwood celebrate the quality of golf that has powered him into back-to-back final pairings and back-to-back solo second-place finishes at Bay Hill and TPC Sawgrass.

“Everybody keeps telling my how old I am. I’m 48 in a month’s time, and I’m still out here contending for tournaments and playing in final groups with great players like Bryson DeChambeau and Justin Thomas, people like that. It’s just a joy to be involved.”

And why shouldn’t he celebrate? Westwood is nearing Champions Tour age. We have no grand expectations for him, nor should we. He’s made more than 2.6 million dollars in the last two weeks. He’s pushed two of the best golfers in the world to the brink, and he’s done so with his fiancee on his bag and a smile on his face. And tomorrow, he’ll head to Augusta National for a practice round with his son Sam — who he expects will caddie for him Masters Week.

There’s a beauty in appreciating life’s accomplishments for what they are rather than merely rueing what they could have been. Westwood seems to have hit that sweet spot. There’s no guarantee that he’ll ever again have such a strong stretch of competitive golf, so it would be a huge missed opportunity not to enjoy it in real time. Good on ya, Lee.

As for the best of the rest? Bryson DeChambeau finished a shot behind Westwood and seemed encouraged: “I can play on golf courses that don’t really suit me. That’s a big lesson,” he said. Brian Harman made a gutsy 2 at 17 and a lengthy par save at 18 to secure his best tournament finish since 2017. And Paul Casey, who finished T5, reminded us Westwood isn’t the only 40-something Brit who’s aging like a fine wine.

Some words on Sawgrass.

I’ve already said plenty about the way the course played this week, No. 17 in particular, but I appreciated the way the contenders were put to the test with firm, fast conditions Sunday afternoon. Paul Casey put it best when breaking down the challenge the course presents:

“You’re always on the hairy edge of disaster,” he said on Saturday evening.

Sunday proved him a prophet. We were reminded of the perils of the 17th when Brendon Todd hit the most glorious of golf shots — a pure cold shank — that nearly satisfied one of my great Tour dreams by landing on the second island. That would have led to a wild rules fiasco and the opportunity for Todd to tempt the gators, swim to the island and play from there (more on that here).

But just as we were recovering from shank shock, DeChambeau hit a cold top into the water at No. 4, and Westwood followed with a wild slice into more water still. Doug Ghim, playing in the penultimate pairing, splashed two water-balls off the 7th tee just minutes later. Golf gets much more difficult when you’re counting by twos.

After a startling 35 golf balls found the water in the first round, that total fell to 13 on Friday and eight on Saturday before ticking back up to 11 on Sunday. The big-time carnage was limited to Thursday, when the hole yielded nine triple-bogeys or worse — including a bunch of 8s and an 11. The last three days, just two players made 6 or worse (including Ghim with an unfortunate late triple on Sunday).

As contenders landed safely on the center island green, one after the next, I couldn’t help but feel impressed by one golfer in particular: Rickie Fowler. No, not because of his play this week (he shot 77-73 and missed the cut by a half-dozen) but because of what he did at the very same hole in 2015, making birdie three times in a row under the gun.

Besides Harman, I don’t remember any of the contenders even taking on that pin in this year’s edition. Granted, some of that conservative play was dictated by firm greens, but still — as the Players continues to elevate in status I can’t help but think that if Fowler pulled off that fantastic finish today, he’d get even more credit than he did at the time.

After Rory McIlroy shot a Friday 75 to miss the cut by 10 shots, he took questions from reporters. One in particular, a salvo from Golf Channel’s Ryan Lavner, stood out.

“What are you most frustrated by, Rory?”

McIlroy’s intense pause before his answer was telling. His answer was, too. For weeks he has danced around the idea that his swing hasn’t felt quite right, his path has gotten messed up and he’s frustrated with how it all feels. But on Friday he admitted that chasing DeChambeau is, he believes, at the heart of the issue. It’s a startling admission for arguably the greatest male golfer since Tiger Woods to make. Why shouldn’t being Rory McIlroy be good enough?

My hope is that admitting it publicly will be cathartic for McIlroy, and the first step towards chasing the best version of his own game instead of imitating DeCheambeau’s which seems particularly impossible to replicate. With our gazes now shifting towards Augusta, Ga., McIlroy has a few weeks to figure out the answer to one question: How can he get his swagger back?

What will Bryson do next?

After the PGA Tour nixed DeChambeau’s prospective line off the 18th tee (which would have meant he’d play over to the water to No. 9 on his tee shot and back across the water to the 18th green on his approach) DeChambeau expressed some regret about revealing his plans to the media.

“I understand it,” he said after the ruling. “I probably shouldn’t have said anything. Knowing that now, I won’t ever say any lines that I’m taking anymore. But that’s okay. I understand it.”

In other words, the next time DeChambeau has a creative use for his 200 mph ball speed, we may not know in advance. It might be even more fun that way anyhow.

Since Ralph Lauren split with Justin Thomas in January, Thomas has been an apparel free agent of sorts. But in recent weeks he’s been more consistently sporting Greyson shirts adorned with his sponsor logos. You’ve seen Greyson on a number of other pros in recent years, from Luke Donald to Harry Higgs to Erik van Rooyen to Sam Ryder and more. But JT remains the top-ranked golfer without a clothing deal. For now.

Another golfer who exceeded expectations this week was Phil Mickelson, who put together a shockingly consistent week of 71-72-71-71 to finish T36, his best result on Tour since last summer. Mickelson is famous for playing like he has an angel on one shoulder and a devil on the other. This week I couldn’t help but notice he dressed that way, too:

And for good measure, here’s Dustin Johnson and Paulina Gretzky on the cover of Cigar Aficionado, recreating the Wayne Gretzky-Janet Jones cover from March 1997. I’ll let you decide who wore it better.

1. Sungjae Im. The Honda Classic’s defending champion has had an interesting season, making 16 cuts in 17 starts but contending just a couple times — most notably in a T2 at the Masters. He’ll be among the favorites at PGA National this week.

2. The pros you haven’t had time for. We’re coming off a ridiculous stretch of high-octane golf, from Invitationals to WGCs to wherever you’d characterize the Players. Well, the Honda Classic is a chance to celebrate that next tier of Tour players, since most of the top guys are taking a deep breath this week and just seven of the top 50 are in the field.

3. Those West Palm winds. The current forecast is calling for 40 mph gusts on the weekend. Things could get weird. We hope so — that way we can break it all down next week.