Band of Bombers: How Bryson DeChambeau found a confidant in another big hitter 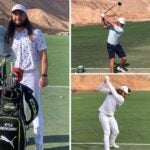 MESQUITE, Nev. — The show was over for Bryson DeChambeau by 1:45 p.m. on Tuesday at the World Long Drive Championships. After a brief autograph session following DeChambeau’s dazzling opening round, the crowd had begun to disperse around him at the Mesquite Sports Complex. Fans slowly filed back in the direction of the event’s three main attractions: the barbecue truck, the bleachers and the range. Brian Ziegler, DeChambeau’s caddie, scooped up his boss’s things and made the short walk back to the car. But DeChambeau did not follow. He was 50 yards ahead, yukking it up with a gaggle of large human beings.

The Bryson Show was over, which meant the real show was about to begin.

Ten feet in front of Bryson stood the long drive king, Kyle Berkshire. Berkshire is six feet, with thick shoulders and brown hair that hangs well below his shoulders. Otherwise, he stands out among the long drive circuit’s cast of super-villain lookalikes for his regular-guy vibe — well, until you see him hit a golf ball.

Berkshire is a member of the long drive world’s “220 club” — the group of players capable of reaching ball speeds at or greater than 220 mph. His swing is a blur, his club whipping well beyond his head and back through again with impossible force, reaching even-less-believable distance.

DeChambeau’s day was done, but only as a competitor. After all, how could he skip out on a rare opportunity to watch one of his best friends in action?

DeChambeau and Berkshire’s relationship is one borne out of intrigue. As DeChambeau’s began to bulk up in late 2019, he reached out to Berkshire, the newly minted World Long Drive champ, about best practices for adding speed. Quickly, the two realized they shared similar approaches to golf, and similar outlooks on the game. They soon began training together and a friendship blossomed.

“We can bounce things off each other, we understand what each other deals with,” Berkshire said. “Obviously, everything he does he deals with is far more intense than me, but I can still have an idea of it. I treasure our friendship greatly, and I think he does, too. And it’s definitely a very genuine one, too. This isn’t just something we do for the camera.”

For Berkshire, DeChambeau was the perfect understudy — a player talented enough to compete at the highest levels of the pro game, but who was willing to commit himself fully to adding distance and speed. For DeChambeau, Berkshire was something much more.

“Not many people to deal with what we deal with, especially with what Bryson deals with on social media, and just in general,” Berkshire said. “I think it’s really cathartic for us to have that outlet of talking to each other and, you know, working through things and kind of discussing things.”

The two speak frequently by phone, and they train together in the lead-up to PGA Tour events whenever Berkshire can attend. He was the original architect of DeChambeau’s highly publicized speed-training program, and more recently, has served as emotional counsel through some of DeChambeau’s high-profile struggles.

“I think that’s the most important thing, we’re really good for each other when it comes to dealing with the psychological, the mental stuff,” Berkshire said. “People don’t understand when you’re in the spotlight, the psychological effect that has. It can get tough when you’re seeing people say horrendous things about you over and over and over. It gets to you. So it’s good to be able to talk to people.”

On Tuesday, DeChambeau and Berkshire caught up for a few minutes before Berkshire’s first-round session, sharing a few laughs and a quick photo. As Berkshire walked over to “the grid,” DeChambeau trailed close behind. Next to the teeing area, DeChambeau smiled as Berkshire uncorked a 409-yard drive with ease on just his fifth swing, nearly eclipsing his overall best.

They’ll spend more time together before the week is through, undoubtedly exchanging a few war stories from their first official friendly competition. Mostly though, two of golf’s longest hitters will just hang out and talk.

About golf, life and the hardest distance of all to conquer — the one between their ears.

“I think that’s the biggest benefit for both of us,” Berkshire said of his kinship with DeChambeau. “It keeps us okay in the head.”