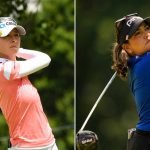 It’s turning into a two-horse race at the KPMG Women's PGA as Nelly Korda and Lizette Salas created separation heading into Sunday.

Nelly Korda and Lizette Salas created five strokes of separation between themselves and the field over the course of the third round at the KPMG Women’s PGA Championship. And that margin may prove too great to close over just 18 holes.

The final grouping Saturday was a study in contrasting styles.

Korda, the young American star coming off a dazzling second-round 63, continued her sparkling play with large drives and pinpoint approach shots. In search of her first major win, the 22-year-old birdied the first two holes of the third round to push her consecutive-birdie streak to eight. She looked unstoppable.

Playing alongside Korda was Salas, a preeminent grinder who’s won just once on the LPGA Tour. A relative short-knocker, Salas is arrow-straight off the tee. She also has some of the savviest putting skills in the game. Despite her drives ending up a ZIP code away from some of Korda’s bombs, Salas matched the young purebred blow for blow.

“I’m not at all intimidated by length,” Salas said. “I just know I can compete out here.”

Compete she did. Although Korda has played some of the best golf in the world over the past two weeks, she couldn’t shake Salas.

When Korda lasered a short iron into the green on No. 1 to set up an easy birdie, Salas responded by pouring in a 40-footer of her own. Korda punched back by reaching the par-5 2nd in two for another easy birdie. Salas stuck a wedge inside three feet to keep pace.

The rest of the front nine was advantage Salas as she taught a short-hitting master class. Korda’s length didn’t get in her head — not in the least. While Korda lined up for short irons and flip wedges, Salas unsheathed hybrids and woods and smashed them onto the greens.

As they made the turn, Salas had the edge. Nearly matching her compatriot’s 29 from yesterday afternoon, she plodded her way to six birdies and a front-nine score of 30. Standing on the 10th tee, Salas was 16 under and owned a two-shot lead.

“I didn’t realize I shot 30 until I signed my scorecard,” Salas said. “Obviously it’s fun when you play like that.”

Despite shooting a front-nine 33, Korda had lost three strokes to her competitor. Salas hadn’t made a bogey all week — and her play on the front nine demonstrated why.

“Just stay calm,” Korda told herself as Salas created separation. “[There’s] a lot of golf, and I just told myself to stay patient out there.”

When her ball chased a bit too far on the baked-out Zoysia, she was left with an awkward stance from which she couldn’t reach the green. When she failed to match Korda’s up-and-down, the lead was cut in half.

In the groups ahead, the field began making moves. ANA Inspiration-winner Patty Tavatanakit reeled off five back-nine birdies to reach 10 under by day’s end. Her 65 was the round of the day. Giulia Molinaro also closed with a flurry to get to 10 under. The two are joined by Céline Boutier five strokes behind the leaders.

But despite a birdie barrage by the third-place trio, Korda and Salas maintained separation. For Korda and Salas, the fireworks of the front nine gave way to a quieter close. Although they combined for just one birdie over the final nine holes, the lead never dipped below five. When Korda’s birdie putt slid low on the 18th green, she and Salas shared the lead at 15 under.

Tomorrow, the storylines will once again contrast. One player will attempt to elevate herself to superstardom. The other will attempt to put on the glass slipper. The only certainty is that anything can happen.

“You still have 18 more holes, a lot of golf left out here,” Korda said. “You just never know with golf. That’s the beauty of it.”