As stars rally around PGA Tour, is this it for the Premier Golf League? 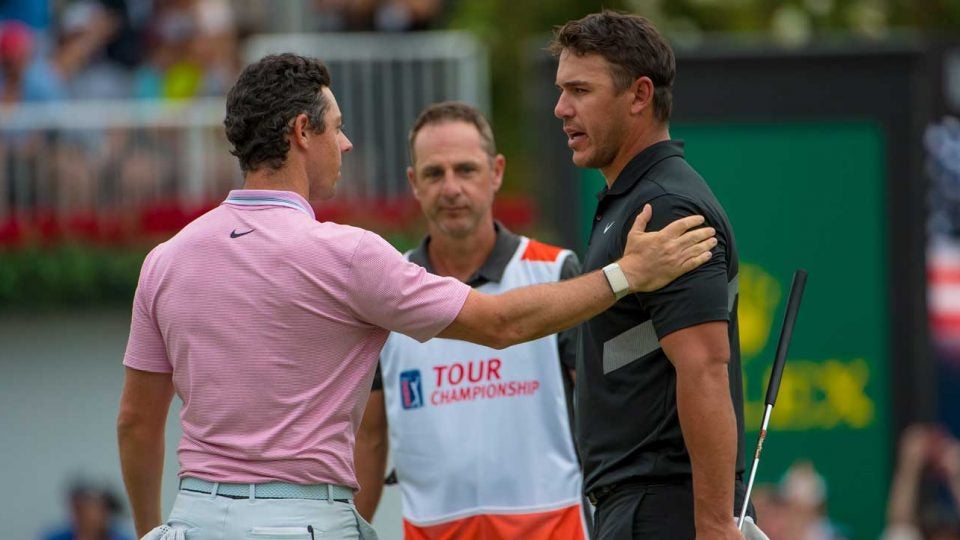 In these uncertain times, several of golf’s top stars have gotten clarity on at least one thing: they’re choosing the PGA Tour over the proposed Premier Golf League.

Rory McIlroy was the first to speak out, first stating his position at the Genesis Invitational and backing it up in the weeks that followed. He enjoys the autonomy of life on the PGA Tour, he said, and he didn’t like where the money was coming from. Brandel Chamblee seized particularly on the latter point. “I applaud the man,” he said, praising McIlroy while excoriating the league’s controversial sources of funding.

Just days after Chamblee’s comments drew plenty of attention on Golf Channel, golf’s World No. 1 has some backup.

“I am out of the PGL. I’m going with the PGA Tour,” World No. 3 Brooks Koepka told the Associated Press. “I have a hard time believing golf should be about just 48 players.”

“I think what I’m going to do is focus on just the PGA Tour,” World No. 2 Rahm added in remarks to Golfweek. “At the end of the day I’m a competitor. I’m a PGA Tour member, and I’m going to stay that way.”

The top three players in the world speaking out against the proposed new league — and re-committing to the PGA Tour — feels like a turning point in the battle for where the top male players will put their craft on display. While the PGL always faced an uphill battle, the concept clearly had caught the eye of several of the game’s top players, including Koepka.

PGA Tour fans can take solace in the fact that even though the game is in indefinite suspension, its top players are committed to its return. The known quantity is winning out.

As word trickled out Sunday night from Koepka and Rahm, two more veteran pros offered their support on social media. “My loyalty is with the PGA Tour,” Bubba Watson wrote on Twitter. He cited the way commissioner Jay Monahan had handled this week’s cancelations as more reason he was “proud to be a member.”

News
When golf (eventually!) returns, here are 4 stories to look forward to

Zach Johnson backed Koepka, too, praising his perspective on the issue. “Well done BK,” he wrote.

What’s particularly telling throughout the latest developments is the support for the PGA Tour’s leadership. Koepka doesn’t usually go out of his way to praise anyone, but made a point to highlight Monahan’s work.

“Jay is incredible, the direction he has the Tour going,” Koepka said.

Patrick Rodgers added he “commended the leadership and responsibility of the PGA Tour.”

Plenty more players added their support as they filed through TPC Sawgrass on Friday. McIlroy said the decision to call off the Players was difficult but ultimately handled well.

“I think Jay did a great job,” Bryson DeChambeau added.

“You know, I stick by the Tour and Jay and everyone’s decision,” said Rickie Fowler.

There are plenty of contributing factors here. The PGL gave players renewed leverage in discussions with Tour leadership, which likely means good things for them. The Tour’s new TV deal means more money coming for the players. And Monahan, despite lagging behind other sports in pulling the plug last week, kept reiterating his support and love for his players during interviews on Thursday and Friday. The Tour seems to be banding together.

Fitness
Pack these immune-boosting snacks for your next round

This isn’t to say that the Premier Golf League’s concept is completely underwater. Even Koepka allowed that without him, it could still live on. But as more top players drop, the chances of lesser players jumping ship — and fans jumping with them — feels less and less likely.

To compare it to presidential primary season, it’s worth considering that despite delegates piling up for the PGA Tour, the biggest state (Tiger Woods) has yet to officially take a side. But Woods just skipped Bay Hill and the Players, two events he was expected to play. That may say more about his ability to play a mandatory 18-tournament season than any press release.

So even as the PGA Tour faces an uncertain schedule, it appears to have the backing of its players. For now, that’s as much certainty as it could possibly hope for.