How one PGA Tour pro earned inside access to Duke Basketball 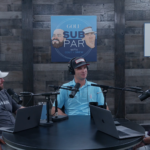 Subpar's Colt Knost and Drew Stoltz are joined by two-time PGA Tour winner Kevin Streelman who talks how he was able to secure Duke Basketball tickets in college by greasing the line monitor in Krzyzewskiville.

There may be no more exclusive ticket in sports than to the Masters, but if there’s another contender, it’s Duke Basketball. Cameron Indoor Stadium draws the ire of rival fans for having the appearance of a high school stadium, and that’s mainly because at a capacity of 9,314, it’s roughly the size of one.

For students, demand is so high that it has become tradition to camp out for days, and sometimes even weeks, in a tent city named “Krzyzewskiville” (after the school’s beloved longtime basketball coach) to ensure their spot.

On the latest episode of GOLF’s Subpar, one former Duke student (and PGA Tour pro) revealed his nefarious relationship with Cameron Indoor. Kevin Streelman played in his college days for the Blue Devils, and while he loved seeing games at Cameron, he couldn’t find the time to join the hoards in Krzyzewskiville.

“I did that one night,” Streelman told Subpar hosts Colt Knost and Drew Stoltz. “I was trying to play golf, pledge a fraternity and camp out for tickets. One had to go and it was the basketball tickets.”

But as an enterprising young golfer, he found a workaround: Cameron Indoor’s line monitor. Line monitors are the gatekeepers for which students get into games, and while they’re supposed to be impartial, they’re known to play favorites. If the line monitor liked you?

“You’d get in,” Streelman says.

As it just so happened, the line monitor and Streelman had something in common.

“Fortunately, the line monitor, who’s like the most powerful dude at Duke, ended up being a big golfer,” Streelman said. “We found that out. So we would slide him to the golf course, get him out on the back nine, give him a quick round. And then he’d slide us into the game.”

A few years of free golf paid dividends for both line monitor and golfer. By the end of senior year, Streelman’s college experience brought him to (arguably) the two most exclusive venues in the sporting universe.

“The best ever, my senior year, ’01, we played Augusta State’s tournament the weekend prior to the Masters, so they gave all the kids Monday passes to the Masters,” Streelman said. “So I spent all day Monday — I’d never been there before — at Augusta watching Tiger and Duval at the top of their games. We drive back to Duke that afternoon and they win the national championship. The greatest 24 hours ever.”

As if you needed any further evidence, Streelman’s story proves once and for all: it doesn’t suck to be a professional golfer.

Johnny Miller: U.S. Ryder Cup team must do this more than anything to win