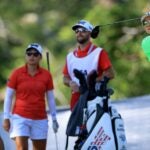 Minjee Lee hits her tee shot on Sunday on the 15th hole at Pine Needles.

Check in every week for the unfiltered opinions of our writers and editors as they break down the hottest topics in the sport, and join the conversation by tweeting us @golf_com. This week, we discuss Minjee Lee’s win at the U.S. Women’s Open, the first event of the Saudi series, crazy seats and more.

1. At the U.S. Women’s Open at Pine Needles, Minjee Lee held off Mina Harigae and a host of others to win with a record 13-under-271 total. Let’s start with Lee. The win gives her two major championships, and eight victories overall on the LPGA Tour. What impressed you most about her this week?

Nick Piastowski, senior editor (@nickpia): The swing, which folks will tell you is one of the most fundamentally sound in all of golf. The putting; if there were to be any doubt late on Sunday, she rolled in putt after putt. But let’s go with the ability to close. It’s hard. Look no further than the men’s game the past two weeks before this one. But Lee did it well.

Josh Sens, senior writer (@joshsens): Her calm. She said it herself. She doesn’t go through wild highs and lows. Combine that mentality with those mechanics, and you see a lot of rounds like she had on Saturday, which is when she won the tournament, building a lead. Then on Sunday, she didn’t lose it.

Sean Zak, senior editor (@sean_zak): The only time she made a bogey all week, and didn’t make a birdie in the next two holes, was Sunday, when she already had a five-shot lead. The bounce-back birdie isn’t often in the cards at U.S. Opens, but she somehow made it possible this week. Reminiscent of Kaymer at Pinehurst in 2014. Out front and never coming back.

James Colgan, assistant editor (@jamescolgan26): Her mentality! She came out Sunday with a huge lead and a very hard golf course ahead of her, but it hardly looked like it. It was particularly impressive watching her tee shots on Nos. 1 and 18, the two most pressure-packed moments of her final round. She striped two shots, found two fairways and never flinched. A deserving champion if there ever were one.

2. As for the week as a whole, what’s your biggest parting takeaway? Pine Needles as host? Nelly Korda’s return? Annika Sorenstam’s return? Danielle Kang’s tumor revelation? Something else?

Piastowski: I’ll go with Kang. It’s incredible that she made the weekend with what she’s dealing with, but let’s hope things turn out OK for one of the game’s brightest stars.

Sens: Life always takes precedence over golf. So in that sense, Kang, for sure. But also Michelle Wie, bidding farewell. She was, at one point, the biggest name in golf. Watching the full arc of a career always makes a fan feel old.

Zak: My biggest takeaway is the winner! She’s the No. 3 player in the world, and she didn’t take ANY time winning major number two. That’s sometimes the trickiest one to win! But she took the first major last year and now suddenly seems like a viable threat for the throne atop women’s golf. What felt like Nelly Korda vs. Jin Young Ko might need to officially add a competitor.

Colgan: I agree with Zak’s point, but I’m partial to Nelly, who played the Open under-par in her first tournament in four months. In her first major since capturing Olympic gold, Nelly received the star treatment at Pine Needles, and deservedly so. Could she be golf’s next truly transcendent player?

3. You’ve seen the field. You’ve heard the reactions. You know the tournament’s details (at least some of them). Let’s cut to the chase: What are your expectations for the first event on the LIV Invitational Series, set for this week at the Centurion Club in London?

Piastowski: Whew boy. It’ll get viewers, but maybe no higher percentage will come from the Tour ranks. If it comes across well, will more players join? If an unknown cashes a multi-million check, will more players join? If it’s a dud, will players drop out and the series crashes before season’s end? All are in play. There’s just not much recent precedent here. And who knows what the vibe will be early in the week at the U.S. Open. Strange, strange times.

Sens: I don’t expect a riveting competition, because fat purses alone can’t generate that. It’s what comes after that will be interesting to watch. How long will suspensions last? Will more Tour pros make the leap? When will the first court filing come? Also: How will battle lines/loyalties continue to firm up among fans? One thing I’ve noticed, at least by tracking the back-and-forth on Twitter, is that opinions about LIV appear to mirror broader political fault lines in our society. Divisive times for sure.

Zak: I wanna hear some expectations, Nick! I expect a relatively small amount of fans to show up, given how hard the committed players are trying to get fans to show up. I expect some players to stumble over their explanations for why they’re there. I expect some players to not want to say anything at all. And I expect the shotgun starts to be weird. Potentially a fun wrinkle we’ve never seen in pro golf. But weird.

Piastowski: Stop yelling at me Sean. But here’s a take. Phil doesn’t finish in the top 40. And there are 48 players. Of course, that’s if he plays.

Colgan: I’m expecting very few fans and a product very inconsistent with the hype that has preceded it.

4. The PGA Tour has already said it will suspend LIV event participants but not for how long or when. The organizations that run the majors also have not declared their intentions. How do you see these thorny questions playing out?

Piastowski: I guess it’s wait and see, right? For LIV vs. Tour, I fear we’re going to be bogged down with court proceedings in the coming months — and we could see some crossovers in the meantime (though I do wonder, with all of the hoopla, whether any players will actually try that). The majors are no doubt interesting. Golfweek’s Eamon Lynch raised an interesting point when he said one of the reasons Kevin Na “resigned” was to avoid Tour suspension, freeing him, theoretically, to still play in majors. But who really knows. Again, whew boy.

Sens: Right. By resigning, Na has spared the USGA and R&A the awkwardness of having a guy suspended by the Tour in the field for their events. That’s in the short run. In the long run, my guess is that the governing bodies will do much like many players have done: fence-sit and see which way the winds are blowing. The questions might be answered for them, if guys who jump to the LIV don’t qualify for their events anyway. In the case of Masters, it seems unlikely that Augusta would disinvite a past champion like DJ. But who knows for sure? If the past months have proven anything, it’s that predictions are just hazardous guesses.

Zak: It’s in the PGA Tour’s court. Jay Monahan can come out Thursday morning at the RBC Canadian Open and say: “Those 48 guys who just teed off in England? They’re banned.” That’s what he’s been promising all along, at least. But as we know, the Tour doesn’t publicize its “disciplinary action.” Once the Tour makes a stand of any sort, I expect that to be the building block for litigation — as soon as this fall! — for Player X vs. The Tour. And Player Y vs. The Tour. And LIV vs. The Tour.

Colgan: This was the problem all along with the Tour’s all-or-nothing promise: They have to back it up. Either they backslide and signal to their entire constituency that taking LIV money isn’t the end of the world — thus giving the new league oxygen — or they ban everyone for life, which is a maneuver of questionable legal and public relations backing. The Tour’s gamble all along was that nobody would jump. Now a few big-name players have, and they have a hornet’s nest to (very publicly) remove.

5. In another LIV development, Kevin Na became the first player among those listed to play at Centurion to “resign” from the PGA Tour. What do you make of the move?

Piastowski: I mentioned it some above, but it’s all kinda … odd. I say this based on this quote that Joel Dahmen gave to Golf Digest on Saturday:” What if the LIV folds in a year? I mean, can he resign his resignment?” Good point.

Sens: I’m sure it was very carefully thought out and financially savvy. He’s given himself a crack at huge LIV paydays while — I would assume — keeping his Tour pension, even if the Tour will no longer be contributing to it. It also leaves the door open for him to play in majors for now.

Zak: I know he wouldn’t do it unless it was absolutely necessary, so it sounds necessary. Na has grinded for decades to live, breathe, eat and play on the PGA Tour. He wouldn’t give it up unless he felt he needed to. Which means someone told him to.

Colgan: Sounded to me like a calculated decision that came at the advice of many lawyers. I sure hope he’s OK with hanging his clubs up for good should LIV go the way of the USFL, XFL, et. al.

6. Next week on the PGA Tour, at the Canadian Open, 22 fans will have a chance to watch the action at St. George’s Golf and Country Club — from a seat, held up by a crane, 100 feet above the action. What other creative spectating options would you like to see come to life?

Piastowski: I mean, I wouldn’t turn down a chance to hit a tee shot. Though I think no one else would want to see that.

Sens: An opportunity to hop on a motorcycle and watch while jumping over a shark. Because that’s what we’ve come to at this point. A crane. Give me a break. Stay on the ground. Watch the event like grandma did. If you really need one, buy a little paper periscope. Does everything have to be gonzo entertainment? And while you’re at, get off social media and get off my lawn!

Zak: How about a six-wide trailer that is pulled behind the leaders on Sunday, right up the middle of the fairway. You get a great, TV-like view, 30 yards removed from the final pairing. Would help people appreciate what it looks like when players work the ball both ways.

Colgan: I will once again bang the table for a commercial-free PGA Tour telecast (or even one with just fewer commercials). Would also listen to a ‘caddie-cast’ of only PGA Tour caddie convos.