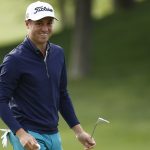 Before the final round of the 2019 Masters, Augusta National informed Tiger Woods that Sunday’s tee times were moved up to the morning to avoid thunderstorms. He couldn’t help but wince at the thought.

“The reward is for playing hard and doing all the things correctly you get a nice little sleep in come Sunday, but that’s not going to be the case,” Woods said at the time. “We’ve got to get up early and get after it.”

That morning, the plan paid off. Woods limbered up, ate breakfast, hit balls and then chased down 54-hole leader Francesco Molinari for his 15th major championship title. But the mention of 3:45 served as reminder that for all the glamor of a professional golfer, there’s nothing easy about an early wakeup.

Still, that doesn’t mean all wakeups are created equal. Justin Thomas teed off at 7:34 a.m. in Thursday’s first round of the Wells Fargo Championship alongside Viktor Hovland and Patrick Cantlay. After posting two-under 69 he cheekily contrasted Woods’ morning routine with his own.

Their banter on the subject dates back several years. At the 2018 Genesis Open, Woods said Thomas had been picking his brain on the subject of morning practice routines during off-weeks.

“JT was asking me this on a flight,” he said. “‘What did you used to do when you were about my age?'”

“Well, I used to get up in the morning, run four miles,” Woods told him with a smile. “Then I’d go to the gym do my lift. Then I’d hit balls for two or three hours. I’d go play. Come back, work on my short game. I’d go run another four more miles.

Thomas’ own routine starts with an early bedtime, especially when he knows he has an early wakeup. He went to sleep at 8 p.m. on Wednesday night, he said.

“I woke up at 4:30 this morning and that gives me enough time to wake up, shower, get ready, do a couple things in the room, takes me about 15 minutes that I usually do, and then I literally come to the course, eat, go see my physio and start my warmup,” he said.

“I’m not a coffee drinker, so it doesn’t really get me going. I have some kind of little energy electrolytes that I’ll drink on the morning tee times; that’s my form of coffee,” he said.

There are two lessons to learn from Thomas’ sleep habits. The first is to force yourself to go to bed early to get a proper night’s sleep, especially during an important work week. The second is to avoid looking at your phone directly before bed. You’ll sleep better.

“If you’re scrolling before you go to bed, that’s not good for your eyes,” Thomas said. Instead, he saves his browsing for the morning.

“That’s how I wake up. I mean, there’s times where I’ll wake up and just kind of get up right away and turn a light on and get going, but for the most part I’ll lounge in bed for kind of that five or 10 minutes and kind of get acclimated with the day and then get going.

Good news for Thomas: He gets to sleep in on Friday ahead of his 12:54 tee time. And if he plays as well in the second round as he did in the first, he’ll be in line for some late weekend tee times, too.