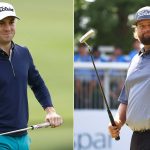 When Mike Visacki Monday-qualified for the Valspar Championship in April, his story — and the teary video of his phone call to his father — went viral. It’s easy to understand why. The 27-year-old mini-tour pro had been trying to play on the PGA Tour since he turned pro in 2014 (with only one Korn Ferry Tour start in between), so when he finally earned his spot — thinking about the close calls, the sacrifices, the people who helped — it all led to that emotional moment captured on video.

But that didn’t solve everything for Visacki. Getting into the event represented a huge win, but after that event (where he missed the cut) he still had work to do, more tournaments to qualify for. The harsh reality is that those bills and traveling expenses add up. That’s where Justin Thomas comes in.

A video surfaced a few days ago of Thomas handing Visacki a check at last week’s Charles Schwab Challenge in Fort Worth, Texas. “I wanted to give you something from me,” Thomas said. “I want to support what you are doing.”

On Wednesday at the Memorial Tournament, Thomas was asked about the video. While Thomas said he was “a little irritated” that it got out — “That wasn’t the intention of it,” he said — he went to say he hadn’t met Visacki until that week at the Valspar. He saw the video of Visacki’s phone call to his dad and called it refreshing.

After Visacki made headlines at the Valspar, he received a sponsor’s exemption to the Charles Schwab Challenge at Colonial. Thomas reached out to him that week and asked if he wanted to play a practice round. Visacki missed the cut, but before the tournament was over Thomas handed him a check.

“I just thought it was awesome because he’s been playing the mini tours and been successful on the mini tours for a long time and people now knew who he was because of his story,” Thomas said Wednesday. “I don’t know, it just, for some reason it hit home to me and it just was like, man, this is a dude who’s been grinding for a long time. And there’s a lot of people, not just him, that are doing that, but I just wanted to help in a little way.”

Thomas said after his gesture he heard a rumor that someone on the board at Charles Schwab found out about what Thomas did and also wanted to help Visacki with expenses this year.

“That’s what I’m most happy about, the fact that he is able to now take advantage of more opportunities because of just something little that I did,” Thomas said. “And, again, it wasn’t the intention for it to get the publicity it did. I just wanted it to be direct between him and I, but if it helps him get more notoriety and helps him and others, you know, able to pursue this dream of playing on the PGA Tour, then so be it.”

Thomas was asked a follow-up question about what specifically he thought made Visacki near-speechless in the video, after he handed him the check. Here’s Thomas’ lengthy response, in its entirety:

“I think it was the gesture, because he didn’t even look at [the check] and it’s, it wasn’t anything, not anything crazy,” Thomas said. “I mean, it was just, I just wanted to help, you know. I don’t care if it’s a thousand dollars, like, that’s extremely helpful for someone who is in that position and that’s what I wanted to do. I wanted to be just like, ‘Hey, man, I know Q-School’s expensive, I know playing in these events are expensive, and like any little way I can help out, I want to.’ And I want to be helpful more than just money. I told him, I’m like, ‘Dude, any time you’ — he lives in Florida and we were going to play some golf together — but I just was like, ‘Hey, dude, if you ever want advice, if you ever want to pick my brain, you ever just want to talk, like, I’m here for you. I’m happy to help.’

“I was very fortunate to have some great mentors and people willing to help me growing up and if it’s a difference of him playing on mini tours or getting his Korn Ferry card the next year, then, like that’s, that means more to me than any amount of money I could ever give him or anybody,” Thomas continued. “So it was just great because, again, I haven’t been in a great place, both just mentally and on the golf course, and for me it was great because it just, I felt joy out of seeing his joy and it just kind of totally made me forget about what’s going on in my golfing life and sometimes puts things in perspective that obviously we’re all out here to play golf and we’re all out here to try to win a lot of golf tournaments, but changing people’s lives and helping people who are less fortunate than you is sometimes, you know, more important than that.”

Thomas begins his first round of the Memorial at 8:32 a.m. ET on Thursday. He’s grouped with Hideki Matsuyama and Patrick Reed for the first two rounds.