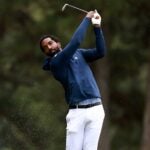 J.R. Smith made his college golf debut this week for North Carolina A&T.

After opening with rounds of 83 and 78 in the Elon Phoenix Invitational on Monday, Smith returned to Alamance Country Club Tuesday for the third round of his college golf debut with the North Carolina A&T Aggies. However, it would soon take a bizarre turn.

According to Twitter user Jared Bunder, Smith hit his ball into the woods on the par-5 12th and ventured into the foliage in search of it. He stepped on a beehive during the search, triggering the bees into a full-blown attack on the two-time NBA champion.

Bunder reported that Smith called in the medical cart to treat his injuries after the attack, allowing other groups to play through while he was being tended to.

You can see a partial video of the attack below.

Smith went on to double bogey the hole, but he did break 80 for the second consecutive round, posting 79 in Round 3 to finish his first collegiate tournament in 81st place.

Check out highlights from his debut below.