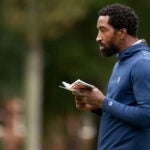 The most famous college golfer is not one of the best amateurs in the world. It’s not Rose Zhang at Stanford or Pierceson Coody at Texas, two of the best college players on the planet.

The two-time NBA champion is in the middle of his first semester at NC A&T, where he is playing on the golf team, a move that has been widely covered and that he has explained in depth. Smith been tweeting all kinds of revelations since his first week on campus. Today he competed in his first tournament as an Aggie, and recently explained his goals and purpose to Claude Harmon on Harmon’s podcast Off Course:

Will we get revelations from his golf experience? Undoubtedly. As far as score goes, Smith got off to a pretty solid start, making two birdies in his first five holes at the Elon Phoenix Invitational at Alamance Country Club. Smith hung in there strong for 10 holes, and was in the middle of the pack on the leaderboard at just one over before things took a turn for the worse.

Smith made six consecutive bogeys, finally breaking that streak with a double bogey on the 3rd hole (his 17th) before finishing off with another bogey to shoot a 10-over 81.

Whatever you do, don’t go rushing to conclusions about Smith’s game. We wouldn’t pick apart your abilities based off one single round, so don’t do that to him. Smith actually beat a handful of competitors in the first round and headed right back out there for a second 18-hole round Monday. Four holes into the second round, he had made three pars and a birdie. Plus, from the looks of the video below and a handful of tweets from those on-site, Smith really had it going to start the day before things got away from him. If you haven’t been there, you’re not a golfer.

In the second round, we saw much of the same from the first round: a solid start followed by a leaky finish. Our man started one over through the first nine holes of his round, but then promptly double-bogeyed the par-3 14th (his 10th). He played cleanly enough toward the end to finish with a 78 to move up the a couple spots on the leaderboard. Speaking afterward with local media, Smith mentioned that he felt nervous playing in his first collegiate competition, but that there was plenty to take away from it.

“[It was] a learning experience,” he said. “Learning how to play in competition. Learning how to play from the rough in certain areas. Playing for a score as opposed to just playing for your ego and pride. It’s a lot different than playing a round with your buddies at the random public courses.”