Jordan Spieth is hurting. But the roller coaster didn’t shut down at the U.S. Open 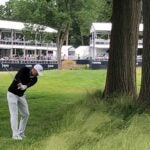 Jordan Spieth hits his second shot on Thursday on the 13th hole at The Country Club.

BROOKLINE, Mass. — Jordan Spieth, 100 or so yards short of water, a first down behind one of the drooping Massachusetts trees here, and inches left from the knee high stuff, saw none of it, flipped his short iron through, and the build-out behind the 13th green approved.

Then missed the putt. Of course.

Earlier this week, ahead of Thursday’s first round at the U.S. Open, reports had floated around The Country Club that the three-time major champion was fighting a stomach bug. Golf Channel reported that Spieth hit just three balls on the range on Tuesday, played very little after that and was operating at “about 20 percent.” Colt Knost, who also co-hosts GOLF’s Subpar podcast, noted on SiriusXM Radio that Spieth was off, according to the Action Network. And at least for a while, something was.

Spieth sandwiched a bogey on 6 with birdies on 5 and 7. He birdied 9. None of the circles came on a putt longer than 12 feet. He bogeyed 10, after missing the fairway right and hitting short of the green on his second shot. But he was looking looser.

On 17 tee, while waiting for Jon Rahm, Collin Morikawa and James Piot to clear ahead of him, Spieth bounced his golf ball between his hands. He looked back at a bystander behind him, seeing if he could match the face. On the tee shot, he tried to cut the corner on the dogleg left, hit a bit more left than you would want, only to run his ball up to 2 feet and birdie.

Spieth closed with a bogey, though on a day when scoring was low, he played his final 14 holes at one under. So up and down. Then gone. He didn’t talk afterward. He wasn’t spotted near the players’ lounge to the left of the clubhouse.

Time to get better. No, not even a stomach bug can put an out-of-order sign on the Spieth roller coaster.