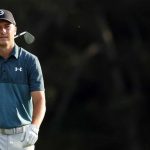 For the first time in what feels like years, the arrow on Jordan Spieth’s golf game is pointing directly upward.

Spieth has opened 2021 on something of a hot streak, including his first victory in nearly four years and a top-five finish at the Masters in back-to-back weeks. He still struggling to find the proper touch and feel around the greens at Augusta National — the hallmark of his early success — yet he still finished just three back of winner Hideki Matsuyama.

It’s clear his mindset around the golf course is different (more on that in a second), but it also seems Spieth’s swing is much improved. In continuing with a recent trend toward consistency, Spieth hit 75 percent of his fairways and 77 percent of greens in regulation for the week at Augusta, a far cry from the player who ranked 165th on the PGA Tour in Strokes Gained: Off-the-tee and 97th in Strokes Gained: Approach in 2020.

“I wish that I had the control of my swing that I hope is coming or I think is coming soon because it would have made things a little easier this week, and I did strike the ball really well,” he said after his final round on Sunday. “I hit a lot of fairways. I put myself in position to hit a lot of greens, and distance control is a strength of mine with iron play, and I did a good job of that.”

The 27-year-old seemed to be chasing the lead from the second he teed off on Thursday — flirting with contention but never quite mounting a serious threat. On Sunday, he squandered any chance to make a serious charge up the leaderboard with three bogeys on his first six holes.

After the Masters, Spieth admitted that even if the major-winning World No. 1 of the mid-2010s is still a good distance away, he’s closer to that version of himself than he has been in a long time.

“All in all, I’ve made a lot of good progress, but I feel like that road ahead is still significant for me,” he said. “So I’ve got at least a couple weeks off right now where I’ll rest for a while and then regroup. Off weeks are where you can make maybe 5 percent differences. Tournament to tournament, it’s hard to go more than a couple percent and trust what you’re doing.”

When he does return, Spieth could emerge from the break with precisely what he’s been looking for.

“Yeah, it’s still a little ways to go,” Spieth said. “One of these days, it could just [click]. Before, I’ve been saying it’s not necessarily one day going to click, but it’s getting to where it could just kind of start to click and really feel that momentum. That will get me wanting to go out and nail it as much as possible.

“So I’m hoping as the next kind of two to eight weeks go by, I can continue to move that forward.”