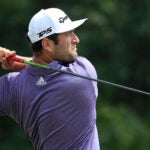 Jon Rahm tees off on the 15th hole at Olympia Fields Country Club on Saturday.

He lifted his ball from the green on the 4th hole before marking for another birdie putt. Not OK.

Rahm picked up his ball from the green without marking during Saturday’s third round of the BMW Championship and picked up a one-stroke penalty. He finished with a bogey on the par-4 on his way to a 4-under 66.

“I really can’t give you an explanation. It’s one of those things that happen in golf. Never thought it would happen in my professional career, but here we are.”

“I used to have a marker that was – the material on top of it was a little sticky, so many times, I would go tap it down and it would get stuck to my putter,” he said. “I know it happened a few times and I’ve seen it happen to people before in instances, where even in amateur golf where you’ve played maybe five events with lift, clean and place and you go somewhere and you do it. I’ve seen things like that happen many, many times.

“Again, we don’t see those on the PGA Tour and usually it’s not followed by a 66 on this golf course.”

When Rahm finished, his 66 was the low round of the tournament. When he finished, he was four strokes out of the lead.

When the tournament finishes on Sunday, Rahm hopes he’s not one stroke out of the lead.