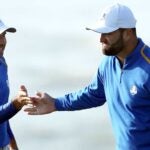 Sergio Garcia, left, congratulates Jon Rahm on Friday after his birdie putt on the 8th hole at Whistling Straits.

Padraig Harrington had heard the “reports,” so he did some reporting himself. Jon Rahm, one of the European Ryder Cup captain’s studs, was hit with a stomach illness, then a missed cut one week before this week’s Ryder Cup, and Harrington checked in on him on Monday after arriving at Whistling Straits.

“He was lifting very nicely in the gym today when I arrived,” Harrington said. “After hearing the reports last week, I arrived in to find him too sweaty to give a hug to lifting some heavy weights.

Very, very good. In match one on day one on Friday, Rahm dropped birdie putts all over Haven, Wis., and he and partner Sergio Garcia defeated the American duo of Jordan Spieth and Justin Thomas 3 and 1 to claim the Ryder Cup’s first point.

In all, Rahm, the world No. 1 and this year’s U.S. Open champ, rolled in over 100 feet of winning birdie putts.

From there, after a Spieth-Thomas win on the 13th and 16th and a Garcia winning birdie putt on the 15th, Rahm and Garcia hung on. One week after his second missed cut all year, Rahm, playing in his second Ryder Cup, won his second career point.

“If anything, being a major champion this year in a tough setup, gives me confidence,” Rahm said Wednesday. “At the same time, it’s match play. It’s different. Tomorrow morning, foursomes, right, or fourballs, so you’re playing with a partner, not an individual anymore. It is a little bit of a different game but at the same time you’ve got to do — try your best, right, and in that sense it’s the same thing. If anything, just gives me confidence in that sense that I know what I’m capable of.”