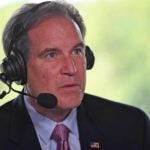 On a call with media Tuesday, Jim Nantz shared his historically high hopes for the next 11 months in golf.

Jim Nantz’s life has been defined by the things he’s done with a microphone in his hands. The CBS Sports broadcaster’s voice has canvassed the world of sports for the last three decades, from major championships to the Super Bowl.

But during CBS Sports‘ press conference ahead of the PGA Championship, Nantz took on a new role — mic dropper.

The typically dialed-back broadcaster interrupted Tuesday’s presser to extend his proclamation about what this week truly signifies for golf.

“No other sport can say this right now except for us: We are about to enter the greatest stretch of golf in the history of the game,” Nantz said. “Starting on Thursday, in an 11-month stretch, we are going to have seven major championships. We are going to have the playoffs. That includes two Masters, two PGA Championships, the Players Championship”

With all four major championships in 2020 delayed or — in the case of the Open Championship — canceled, the pros face more than a half-dozen opportunities to claim a major in the next year alone, to say nothing of golf’s other high-profile events.

It’s an unparalleled moment in the sport’s history, and Nantz believes golf fans are going to reap the rewards of having survived a spring without a major championship.

“If your game is on go right now, you have a chance to make a career into the next 11 months, starting on Thursday,” Nantz said. “To have a stretch of golf, you get four in a year usually. We are going to have seven in 11 months, plus, the Players, the playoffs, all that. It’s an amazing stretch for the game. That to me is what we need to be talking about right now.”

For Nantz, who will be in the booth for more than half the majors over the forthcoming 11-month stretch, the CBS crew’s focus is on opening golf’s doors to a new audience of fans.

“It’s an important thing for us who are documenting the sport and who love the sport and care about it, and we try to make sure that we reach the fringe fan and people that maybe aren’t fully aware of what’s going on in golf,” he said. “That’s a big story to tell. It’s a big headline.”

However large the headline is, golf won’t be the only headline heading forward. Professional basketball, hockey and baseball are all returning to action, and the NFL looms on the horizon. But even if golf isn’t the only show in town, Nantz says it still might be the best one.