The first time Jack Nicklaus broke 70? There’s a fittingly epic story behind it 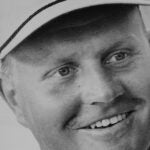 Can you guess which group Jack Nicklaus belongs to?

The story of the Golden Bear’s first sub-70 round is fittingly epic for the most decorated golfer of all time. And, as he explained recently at The Generational Salute, a military fundraiser in Dallas, it came well-earned.

The story, which Nicklaus recounted to host David Feherty, begins in Ohio in the 1950s, where a teenage Jack lent a hand at his father Charlie’s drug store in Columbus.

Even at 13, Nicklaus was a preternaturally talented. He played as often as he could, practiced as frequently as his family would allow him and often pestered his father to get out on the course together. After a few months of working shifts at the pharmacy, Jack’s advances began to work. Soon, father and son were slipping off to the course in the afternoons, stealing 9 holes or more before sunset.

One day, a round was going particularly well for young Jack, and he found himself making the turn with a benchmark score within reach. Having shot 35 on the front nine, Jack had visions of breaking 70 for the first time.

But as they rounded the turn, Charlie glanced at his watch.

The news pushed young Jack to the verge of tears, and so his father offered a compromise.

“‘He says, ‘I tell you what, why don’t we rush home, we’ll grab a really quick dinner and we’ll come back.'”

Jack quickly agreed, the pair went home and Jack spent dinner thinking about what lay ahead on the back nine. At long last, Charlie and Jack returned to the course. Jack whipped his way around the back nine, eventually reaching the 18th tee, a par-5. But when they reached the green, something was wrong.

“I knocked it on the green to about 35 feet from the hole, and I was one stroke under par,” he said. “There was a water sprinkler and hoses all across the green. We dragged the sprinkler off the green and there was water all over.”

Jack had one putt from close to 40 feet to break 70 for the first time — a putt that would have to run across a waterlogged green with no way of knowing how the water would affect its speed or break.

In other words, he needed some Nicklaus magic.

“Well, I holed the 35-footer,” Nicklaus said with a laugh.

Truthfully, Nicklaus admitted, all these years later, it’s not the sub-70 round that most sticks with him. It’s the time with his father.

“My dad was my biggest fan and he was my best friend,” he said.

The next frontier of game improvement