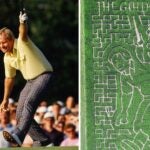 It's time to *literally* get lost in Jack Nicklaus' '86 Masters celebration.

In the iconic words of Jim Nantz, the Golden Bear’s 1986 Masters win brought him out of hibernation — and today, it’s responsible for beaming his likeness into the stratosphere, courtesy of “The Maize at Little Darby Creek.”

That’s right, golf fans of all ages will be able to take in some Nicklaus-inspired fall fun in the corn maze made to his likeness not far from his home in Dublin, Ohio. The maze is located just outside of the town of Chuckery, roughly 25 minutes from Dublin, Ohio (home of both Nicklaus and his famed Muirfield Village Golf Club, which hosts the Memorial Tournament) and 40 minutes from the center of Columbus.

According to Little Darby Creek, the farm that organizes “The Maize” every year, this year’s design is more than two miles in size, featuring more than 85 decision points along the path, which is crafted along the design of his famed birdie on No. 16 at Augusta National.

The maze, which features the now-famous image of Nicklaus with his arm raised in celebration, takes roughly a half-hour to walk uninterrupted and should take visitors roughly an hour to complete, according to organizers.

Nicklaus is an Ohio hero — a native of Columbus who completed a decorated amateur career as a student-athlete at Ohio State University and later returned to his home state to serve as a missionary for its place within the game of golf. His design work and host duties at Muirfield Village have brought the best players in the world to Ohio for the Memorial Tournament for decades, including at the 1987 Ryder Cup.

As for whether the Golden Bear will be making an appearance at the maze in his honor? Well, that’s still TBD, though we’d love to see whether Jack’s green-reading prowess transfers to problem-solving in the stalks.

Big shots: Abraham Ancer and Mark Wahlberg teamed up in the tequila business — and are having a blast