#AskAlan mailbag: Is Tiger Woods the best player in the world despite his ranking?

In this installment of the #AskAlan mailbag, GOLF senior writer Alan Shipnuck answers your questions about whether Tiger Woods is the top golfer alive, Bryson DeChambeau’s self-awareness (or lack thereof) and more.

If Jack is MJ and Tiger is LeBron, who is golf’s Kobe? -@GrantLeigh3

A transcendent player who in his prime was revered but not beloved, a highly specific personality peddling his own myth who rubbed some people the wrong way but inspired others, a tireless and even obsessive worker burning to be great? Gary Player.

The Rahm thing is ridiculous, it’s not like he had a 5-footer uphill for the tie. -@M6Mike

It’s true that the odds are against canning a 50-footer on the 72nd hole with a tournament hanging in the balance. But Rahm himself said he lagged it up there to make sure he secured a two-putt which he thought would force a playoff. It’s not about the one putt that didn’t go in but, rather, what it revealed about Rahm’s mental acuity under the gun. Would Tiger ever make such a schoolboy error?

Would you put money down on Marc Leishman winning a major before his career is over? He comes across as a very likable guy. -@LaBeets

Definitely. He’s a threat at any Open Championship or Masters. The player he’s always reminded me of the most (consummate shotmaker, great chipper, flammable putter) is Shane Lowry, and we know how that turned out.

A lot of “experts” are saying that Tiger is the best player in the world right now. Yet he is sixth in the OWGR. What exactly is the point of the rankings if we’re just going to ignore them? -@linksplayers

The OWGR algorithm is not a prisoner of the moment. It takes into account a significant body of work while Golf Twitter especially tends to overreact to what just happened. At Royal Melbourne, Tiger proved beyond a doubt that on a firm, fast course that demands precision and shotmaking and discipline ⁠— basically, the ultimate test ⁠— he is still by far the best player in the game. 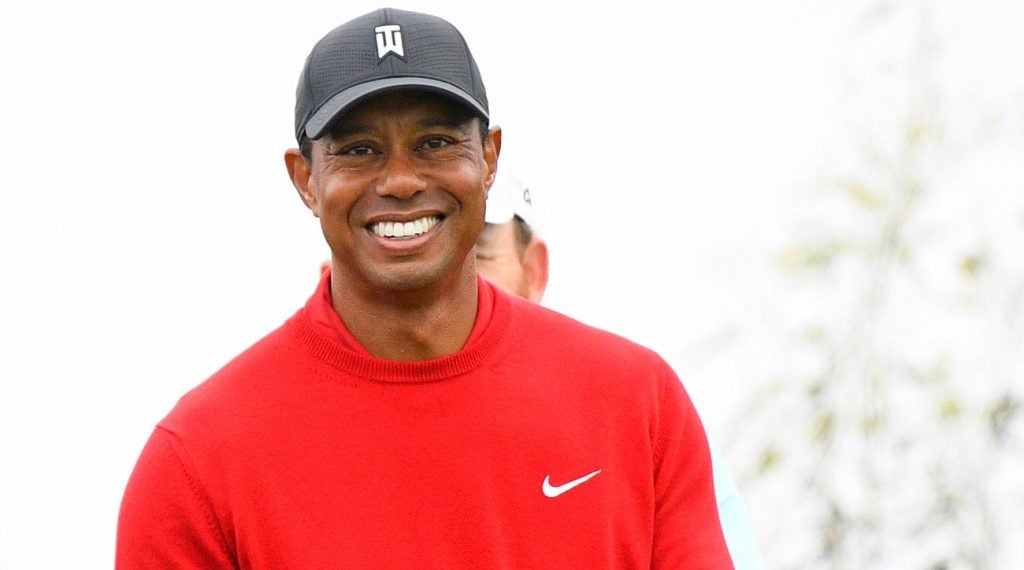 But that is a highly specific criteria. On a long, narrow setup with thick rough, like Bethpage or Winged Foot, there are two or three dozen players who are more proficient than Woods. On the pressure-packed back nine of a major, when everyone is losing their mind and clear thinking and mental fortitude are paramount, Tiger can still get it done, as he proved at the Masters while the rest of a stellar leaderboard imploded.

But his reconstituted spinal cord doesn’t allow him to prepare the same way as the young bucks, and he has to limit his starts, so Tiger is unlikely to ever again be the most dominant player on Tour, and he may never again summit the World Ranking. But is he the best player in the game right now? Mostly.

⁠Is Bryson really that lacking in self awareness? He picks a fight with Koepka he can’t win, then plays a Euro tour event when officials there are looking for a dawdling target for publicity. It’s like he needs a full time numbskull prevention advisor. -@HampRogers

I think you answered your own question.

What is your favorite tournament on the West coast swing and why? It’s my favorite part of the schedule with Torrey Pines, the rowdy gathering in Scottsdale, Pebble Beach and Riviera. -@SteveThomsonMN

The Clambake is so fun if you avoid the “celebrity” rotation and watch pro’s pros take on Spyglass and the Shore when there is almost no one else out there. And Sunday at Pebble is a blast when the focus is on real golf and the course. But overall I think the answer is the L.A. Open (now known as the Genesis Invitational, hosted by Tiger Woods). The field is stacked, the course is so pure, and there is a rich history and a little stardust sprinkled over the whole thing.

Supporting golf in the “Saudi Arabian region” makes no sense. Give me a good reason to play there this week, minus the appearance fee. -@JustShake

Well, Phil wangled a pro-am pairing with the would-be founders of the Premier Golf League, so he’s also finding time to subvert the PGA Tour. And with Saudi Arabia determined to pour more and more money into the game I have no doubt other players (and their handlers) are discussing course design projects, teaching academies and other ways to, ahem, grow the game. 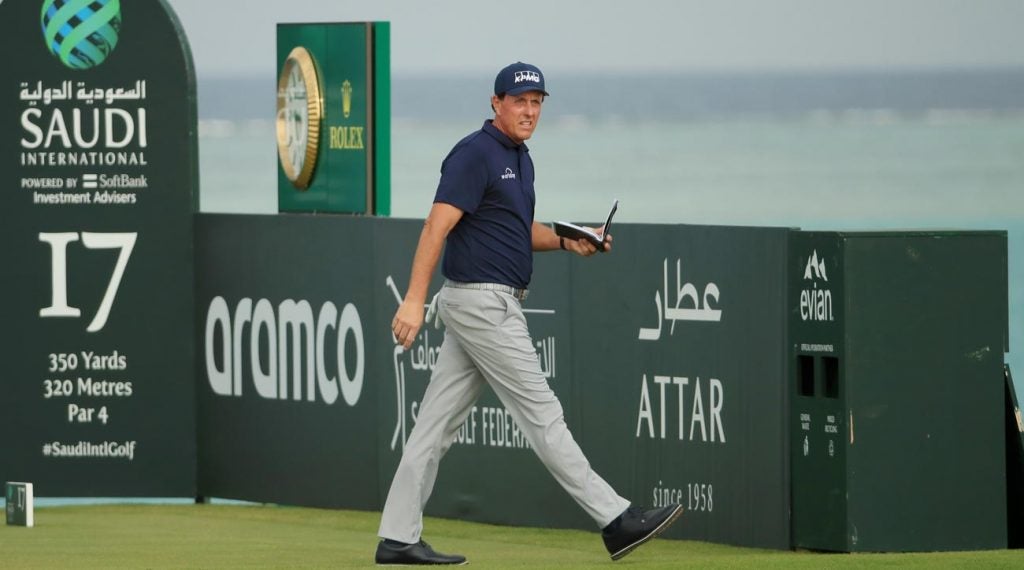 Does the fate of the proposed PGL rest entirely on Tiger deciding to nuke the PGA Tour? Can you see that actually happening? -@M_Sand09

Not entirely. If they could sign up every other top player it’s still viable. Let’s face it, golf needs to start preparing for life after Tiger, who is, after all, 44 years old and has endured more surgeries than Joan Rivers. Woods has always been a mercenary and he has his price, like anybody else. If the Saudi oil guys guarantee him $100 million or $200 million a year to play 10 tournaments, plus offer bloated purses he can dip into, I’m sure Tiger will be tempted. He rightfully reveres the major championships and is loyal to a few other events that have emotional resonance, like Torrey Pines and the Memorial, but I don’t think Tiger particularly cares about the WGCs or FedEx Cup playoffs, and who can blame him? These WGL events would simply replace one set of cash grabs for another, but in this scenario the money is guaranteed.

No doubt the other top players will be watching Tiger closely for cues on how to proceed. Don’t forget, it was Arnie and Jack who blew up the PGA of America and created the modern PGA Tour, and that was way before the era of top stars in other sports acting as de facto GMs and controlling their own destiny. There is certainly precedent in golf for the biggest names to create structural change. It feels a tad distasteful that the PGA Tour’s rich history could be tarnished by the filthy lucre of a shady petrocracy but, hey, money always talks. If the PGL offers me $10 million a year to be commissioner I will have to consider it.

When will PGA do the right thing and start penalizing players shots for refusing to shout fore as wayward drives clatter into their adoring fans? For whatever reason the majority of these privileged stars couldn’t be bothered with this basis courtesy. Rant over. -@bcunningham0

I feel ya. It is bad form and does speak to a certain entitlement. The penalty should be that any fan who is doinked by the ball gets to throw it into the trees or a bunker, with no relief given.

What is it about winning, Alan? Both Ashun Wu and Ryan Palmer melted into the distance after catching the scent of silver. So what is the marker for those that can win and those that cannot? -@SportaSmile

This is the defining question in all of sports — what separates the closers from the journeymen? You can’t spot it on the range. You can’t even spot it between the ropes on Thursday or Friday or Saturday. Winning is a black art, an MRI of the soul. Even the best winners have trouble articulating how they do it. It’s this very mystery that makes tournament golf such compelling theater.

Rules
Rules Guy: Was Tiger Woods robbed of a hole-out? Here’s why it didn’t count

Have you ever seen anything as strange as Tiger’s ball jumping back out of the hole? – @GolfBurner

Only the bounce he got on the 72nd hole at Valhalla, which remains one of golf’s great conspiracy theories.

Is it hard to play average courses after your Australia/New Zeland trip? -@BSura22

That trip came with a helluva hangover — I didn’t touch a club for two months, the longest drought of my life. Those courses did blow my mind, but it wasn’t really about that, as I’m lucky to have access to some pretty good ones in my backyard. But the camaraderie and sense of adventure of that trip just made an everyday stroll around the links feel rather wanting. Luckily the itch came back eventually, as it always does.

Have you ever answered a question from your own burner account on #askalan, and does your burner have any aces? -@GolfingBrock

Hahaha, I’m not cool enough to have a burner. Also, if I did I would inevitably blow up my spot with comments that would be too easily traced back to me. Furthermore, I barely have time for one Twitter account! Wait, it sounds like I doth protest too much…