By Michael Bamberger and Evin Priest 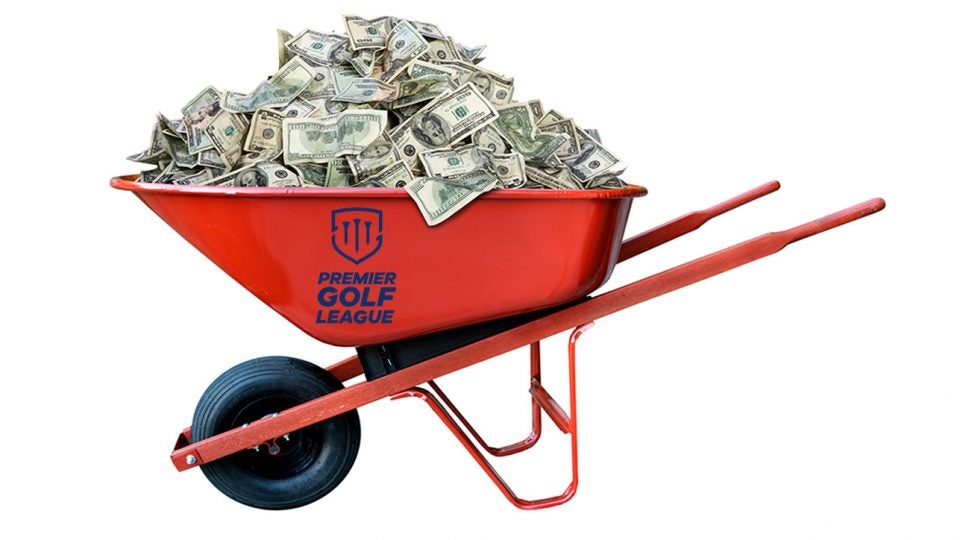 Anything new, anything proposed, is always hard to get your arms around. In 1968, Arnold Palmer was sitting on the fence when other players, including Jack Nicklaus, said it was time for the touring players to break away from the PGA of America and start a new entity, the PGA Tour. You know how that worked out.

Now Jay Monahan, the fourth commissioner of the PGA Tour, is facing the biggest challenge of his three years as commissioner: how to deal with an upstart group called the Premier Golf League that wants to fund and run a world tour that would consist of 18 events, each featuring 48 players, where first-place prize money, according to one agent with knowledge of the proposal, would be a minimum of $5 million, and could be double that.

Last week, when the Tour made its annual stop at Torrey Pines, Monahan met with members of the 16-man Player Advisory Council and gave them a clear message: Talk to whomever you want about anything you want, but (as they say on the Showtime Wall Street drama Billions) know this: Nobody will be a member of both the PGA Tour and the Premier Golf League.

News
Tour Confidential: What would a new star-driven global tour mean for the PGA Tour?

It was the smartest thing the commissioner could possibly say, because if the PGL really happened, the PGA Tour would quickly become golf’s version of AAA baseball. It would be a feeder league.

Rory McIlroy is a member of the PAC. He said last week that he was approached about the prospect of joining this would-be tour in 2014, so some version of this idea has been in the works for a while. On that basis, the idea that this new tour, which would plan to subsume existing tournaments including the Australian Open and the Singapore Open, would be up and running by 2022, as some players said, seems unlikely.

On the other hand, money talks in every country and in every language, and, according to the agent familiar with the deal, the seed funding is coming from Saudi Arabian oil money. Even a $1 billion investment, which would be vastly more than needed to start a tour like this, is play money to Saudi oil oligarchs and royals.

This week, the European Tour is playing in Saudi Arabia. The venue is the Royal Greens Golf and Country Club in the King Abdullah Economic City in Saudi Arabia. Phil Mickelson is in the field. On Friday, after missing the cut at Torrey Pines, the 49-year-old golfer said, “I’m curious, but I don’t know enough to talk about it. I’m listening to it. I think it’s intriguing, but I just don’t know enough about it to comment publicly. I hope to learn more.” 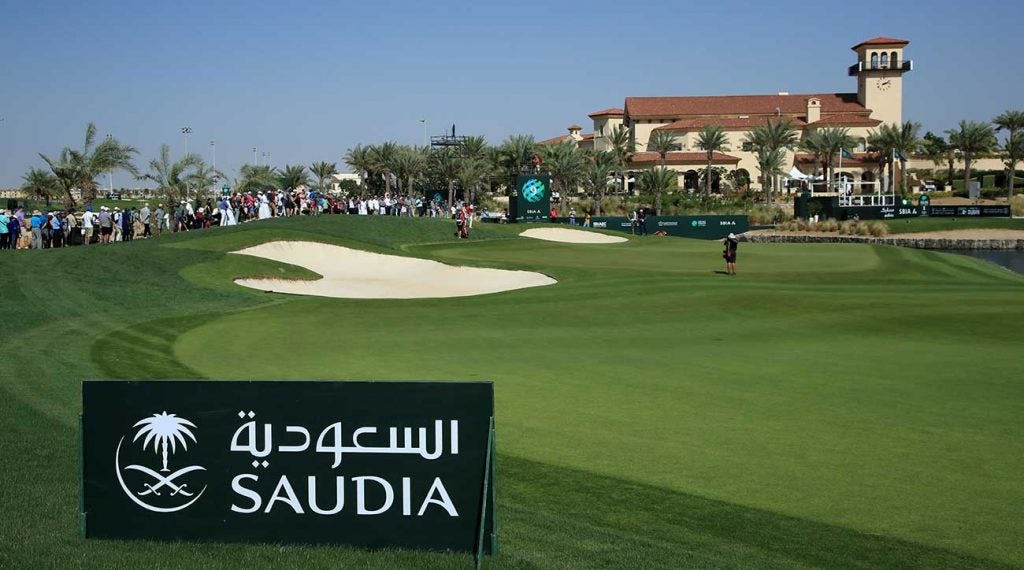 Phil Mickelson is among the golfers who have committed to play in this year's Saudi International.
Getty Images

With the tournament coming to town, a publication called Arab News quoted a Saudi prince, Khalid bin Saud Al-Faisal, on the subject of golf and the Saudi interest in it. “With the ambitious plans for the Saudi game, supported by King Salman and with special support from Crown Prince Mohammed bin Salman, golf has a bright future, and should provide many job and career opportunities for Saudis, both male and female,” Khalid said.

Yes, Mohammed bin Salman who, according the CIA, personally ordered the killing of the columnist Jamal Khashoggi. This is going to get more interesting before it ends. Most golf fans just want to watch the best golfers play on TV, or a screen of some kind.

“What the PGA Tour doesn’t have is that they can’t go to a sponsor and guarantee a field,” said a player at Torrey. A half-dozen players spoke to GOLF.com about the issue last week with the understanding that their names would not be used. “Everyone on the PGA Tour is an independent contractor. However, this group is going to contract the top 48 players in the world and say, ‘These are the 18 events you are contracted to play.’ They could go to sponsors and say, we can guarantee the 48 top golfers. What sponsor and TV network wouldn’t want that?”

Players said that representatives of the proposed league were at the Presidents Cup last month in Australia and made pitches to 10 different players. In addition to the Australian and Singapore Opens, the representatives mentioned the Alfred Dunhill tournament in South Africa and the Dubai Desert Classic as tournaments that could come under the PGL umbrella.

Who are these PGL people? Unclear. A cryptic press release was sent out on Friday above the PPL logo, a shield with three golf tees in it. It read:

“There has been significant media speculation relating to our plans to launch The League, a new professional golf format that will be comprised of 18 events per season. Some of that speculation, including details of the proposed format and our financial backers, is inaccurate.

“While we do not wish to comment further at this time, we would like to say that it is our intention to work with, rather than challenge, existing tours for the betterment of golf as a sport, pastime and media property, and we have partnered with the Raine Group to help make this vision a reality.

“We appreciate the interest and look forward to providing everyone with further details.”

It was signed by “the Comms Team,” which appears to be a public-relations firm retained by PGL. The Raine Group is an international, New York-based investment and advisory firm with a wide range of interests, including DraftKings, and Nitro Circus, an action-sports entertainment company. “It’s further along than most think,” a second player told GOLF.com of PGL’s plan. “These Raine Group guys are really good operators.”

Got this in my inbox this AM from the “Premier Golf League,” as I’m sure many others did. Had to chuckle at this section

“for a start, we’ll pay tax” is a delightful flex. And the suggestion that they’ll provide welfare to Ponte Vedra down the line was pretty tasty 😂 pic.twitter.com/L262euvntW

Greg Norman started to talk about a World Golf Tour in the mid-1990s and it might have gone somewhere, except he didn’t have Arab oil money behind his idea and the Tour commissioner, Deane Beman, was a brilliant and heavy-handed advisory.

What Norman, as an Australian playing the PGA Tour, recognized was that the fundamental nature of the Tour had changed, but nobody was admitting it. All these years later, that’s even more true.

The tour, lowercase t, going back to the Ben Hogan, Sam Snead, Byron Nelson days, was a sort of traveling circus. Local businessmen put up a purse, the game’s best players came to town, fans came out and watched, most of the money went to the players and whatever was left over went to a local charity. Each event was its own entity.

The modern PGA Tour in a nonprofit organization that raises millions for all manner of good causes but looks and operates much more like an international business, with highly paid executives, corporate jets, vast real-estate holdings and an enormous marketing and PR operation. It hasn’t been a mom-and-pop operation for well more than a half-century. You could make the case that its top players have been vastly underpaid, in comparison to what leading NBA players, NFL players and MLB players were making. That was true in the Norman-Nick Faldo-Nick Price era and it remains true in the Tiger Woods-Rory McIlroy-Justin Thomas era. That gives the PGL an open door to start a conversation with these top-48 players.

The money will have to be massive because the risk of getting banned by the PGA Tour has to be an obvious concern.
PGA Tour player in the Farmers field last week

But golf does not enjoy a deep list of brand-name players and that is an inherent problem. A multiple-time Tour winner said last week: “If you take Tiger out of the equation, how much do these other guys attract enough interest to get this off the ground? Tiger is the only one who moves the needle. You look around Torrey Pines this week and 75 percent of the fans are following him. What does that tell you? Rory is a wonderful player and certainly a drawcard, but he doesn’t have the magnetism Tiger does. Brooks is injured a lot.

“The money will have to be massive because the risk of getting banned by the PGA Tour has to be an obvious concern. There’s also the issue of what this new tour’s retirement package is going to pay, compared to the PGA Tour. Some of these top players, their retirement packages are going to be astronomical. Unless they are matching that, I don’t know if it will ever work.”

Upstart golf leagues have a long history of not working. In the end there is one thing that could make this one different: cold, hard cash.

“It depends on the money,” said a fourth player, who also has multiple Tour wins. “There is such big earning potential on the PGA Tour. So, it would need to be a crapload of money to entice players to come across. I don’t know about everyone, but I know I’ve got a price.”