‘Is that Jordan Spieth to a T or what?’ Spieth nearly hits fan, makes next shot 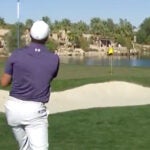 Jordan Spieth hits his second shot on Thursday on the 11th hole at the Summit Club.

Jordan Spieth neared Louis Oosthuizen, and even Oosthuizen, as stoic as they come on the PGA Tour, was laughing. Spieth embarrassingly dropped his head and shoulders and offered a fist bump. Oosthuizen would add a few chirps, too.

“Look at Louie,” analyst Curt Byrum said on the Golf Channel broadcast. “He’s like, that is unbelievable. That is you, Jordan.”

Indeed. Spieth, during Thursday’s first round of the CJ Cup, hit his tee shot some 30 yards right of the green on the 251-yard, par-3 11th at Summit Club, nearly hit a patch of sitting and presumably safe spectators — only to pitch in, with a bunker in front of him and water behind the green. That is Jordan, who’s made a career of going left or right, only to go up and in on the next shot.

“Is that Jordan Spieth to a T right there or what?” Byrum said on the broadcast.

“What a shot,” Byrum said on the broadcast. “Way to take some guts, with water on the other side of this green right there staring you in the face.”

“He knew it, too,” Immelman said. “You see the club twirl after that? He knew it came out perfect.”

The birdie would be part of four straight for Spieth.

“So good,” Byrum said on the broadcast.