‘The first 57 in Tour history’: Inside Viktor Hovland’s unreal round at Torrey Pines 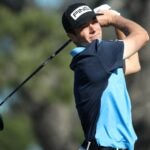 Viktor Hovland shot a seven-under 65 in the second round of the Farmers Insurance Open.

Viktor Hovland shot a seven-under 65 in Friday’s second round of the Farmers Insurance Open. But simply reading the score doesn’t tell the whole story.

Hovland’s 65 came on a day when Mother Nature was breathing fire in Southern California. The usually mild conditions gave way to an array of wind and precipitation as players battled the elements all day at Torrey Pines, even waiting out an hour delay before squeezing in play just before darkness.

And while Hovland didn’t have the low round of the day in the tournament (an honor belonging to Robby Shelton, as he shot 64), his round was the best of the day on the much more challenging South Course — and it wasn’t even close. The 23-year-old’s round was the best on the home of this year’s U.S. Open by four shots, and it vaulted him to the top of the leaderboard.

“I think especially playing a tough course like the South Course, you can’t really fake it, especially in these conditions,” Hovland said. “Playing a hard golf course and then playing well, that I think is what gives me the ultimate kind of belief that I played really well today. You just can’t really fake it.”

When digging into the advanced metrics, Hovland’s round is all the more impressive. For the round, Hovland’s SG: Total was 9.76, as the cumulative total for all players was 210-over par on the South Course. The performance left some gobsmacked.

“Hovland’s -7 on the South Course today is the first 57 in PGA Tour history,” Tour caddie Aaron Fleener said in a tweet after the round.

Hovland did most of his damage with his ball striking. He hit 11 of 14 fairways and 16 of 18 greens in regulation and gained six strokes on the field from tee to green. Holing nearly 100 feet of putts didn’t hurt either.

Hovland credited his success in the brutal conditions to his recent practice routine he’s taken on in Stillwater, Okla., where he graduated from Oklahoma State just over 18 months ago. Practicing with multiple layers on prepared him to face the elements.

“I think that’s helped me for this week,” Hovland said. “It got really cold and obviously raining and hail, so being Norwegian, I think that also helps.”

If the Norwegian can replicate the performance he put on during Round 2 as players head into the weekend, his third-career Tour win could be just around the corner.