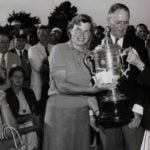 In golf, it has been noted, every shot makes someone happy.

The same cannot be said of every score.

On June 29, 1957, no one found much pleasure in the final tally at the U.S. Women’s Open Championship, at Winged Foot Golf Club, in Mamaroneck, N.Y., not even the woman who walked off with the title, the future World Golf Hall of Famer, Betsy Rawls.

“It wasn’t how anyone ever wants a tournament to end,” Rawls, now 92, recalled the other day from her Delaware home.

In wind-whipped conditions on Winged Foot’s firm, fast East Course, Rawls closed with a 76 for a four-round total of seven over — a solid showing, given the fierce setup and the forceful gusts, but also shy of what she thought she needed.

It placed her one shot back of the apparent winner, Jackie Pung, a charismatic player from Hawaii, who fired a 72 to pass Rawls down the stretch.

As Pung celebrated greenside with her teenage daughter, ringed by spectators and members of the press, Rawls made her way to the parking lot. She had just stashed her clubs in the trunk of her car when word reached her of a scorekeeping snafu. Just as Roberto De Vicenzo would do at the Masters 10 years later, Pung had signed for an incorrect card, a slip-up that resulted in disqualification.

Rawls received the trophy instead, the fourth of her eight career major wins.

“It felt very bad for Jackie. It was a terrible way to lose,” Rawls said. “But then again, rules are rules.”

This weekend marks what was meant to be the 75th playing of the U.S. Women’s Open, a tournament that was still in its infancy when Rawls and Pung arrived at Winged Foot to compete, which might at least in part explain why so much ink has been spilled over De Vicenzo’s Masters mix-up but not so about Pung’s heartbreaking miscue.

Against an elite field that also featured the major winners Patty Berg, Louise Suggs and Betty Jameson, Pung teed off as something of a sleeper, an accomplished player but a relative unknown.

Her genial demeanor made her easy to root for, as did her up-from-her-bootstraps background. Born in Honolulu, in 1921, Pung taught herself the game and harnessed the power of her homemade swing to win three consecutive Hawaiian Women’s Amateur titles. In 1952, with $200 she borrowed from the credit union at the department store where she worked, Pung entered the U.S. Women’s Amateur at Waverley Country Club, in Portland, Ore., and won. Reports at the time described her dancing the hula on the 18th green.

It was Pung’s first moment in the national spotlight, and she followed it by turning pro. In 1953, she finished second in the U.S. Women’s Open, where she fell short in an 18-hole playoff to none other than Rawls. That same year, Pung won two LPGA events. But more than any title, what gained her most attention were her buoyant personality and her style of play.

“This year, playing for pro pay, Jackie has restrained her hulas,” Time magazine reported, “but her booming 240-yard tee shots have taken the play — and some of the pay — from such old pros as Babe Zaharias and Patty Berg.”

While the game came naturally to Pung, her career did not. Pung disliked the travel. She was homesick for her husband and their two children. She also suffered from persistent illness, later diagnosed as diabetes, which forced her into long breaks from competition. She sat out much of 1956.

Pung was barely shaking the rust from her swing when play at Winged Foot got underway. But she stayed in the mix, and on a 36-hole Saturday finale, she shot an even-par morning 18 to climb within five shots of the leader, Rawls.

Paired with Betty Jameson that afternoon, Pung started strong in swirling winds that were the last gasps of a hurricane working up the coast. She birdied the 2nd and 3rd holes. On the par-5 4th, Pung and Jameson both made 6, but each woman, keeping the other’s score, wrote down “5” on their cards, a fateful error that wasn’t noticed until more than three hours later.

By the time she reached the 18th tee, Pung had the gallery’s full-throated support. Adding to the air of anticipation, a USGA official assumed the role of impromptu on-course reporter by announcing through a bullhorn, as Pung approached the green, that she only needed par to seal the deal.

A par is what she made, giving way to a celebration that was as spirited as it was short lived.

Though Pung and Jameson each calculated their totals correctly, neither caught the glitches they’d recorded on the 4th hole before they signed and submitted their cards. Both were DQ’d, with Pung’s carrying the more painful repercussions.

Disqualifying Pung was far from a widely popular move. Writing in Sports Illustrated, Herbert Warren Wind decried the ruling, arguing that the spirit of the game would have been better served had “the technicality of disqualification been waived” on Pung’s behalf.

But the DQ was not a knee-jerk decision. It arose from clearly written guidelines that had only recently been revised in response to two separate scoring errors that occurred at major championships in 1956. At the time of those infractions, the prescribed punishment for submitting a wrong score was a two-shot penalty. But many observers felt that was too lax, and a majority of the USGA executive committee agreed.

Apprised of her mistake, Pung broke down in disappointment but composed herself in time for a closing ceremony, where she stood gamely beside Rawls and the trophy she’d briefly thought was hers.

“Winning the Open is the greatest thing in golf,” she said. “I have come close before. This time I thought I’d won. But I didn’t. Golf is played by rules and I broke a rule. I’ve learned a lesson. And I have two broad shoulders.”

She also had the sympathy of everyone who’d watched. Winged Foot members took up a collection on Pung’s behalf, which soon drew contributions from members of the press. USGA officials also pitched in, pushing the pot to $3,000, a greater sum than the $1,800 Rawls received with her first-place check.

All these years later, Rawls said the details of the tournament’s aftermath are hazy. But she remembers that she and Pung wound up speaking briefly, with Rawls offering her consolations and Pung handling her own anguish with grace.

From Winged Foot, the two women continued on parallel paths, cordial competitors on the course whose social circles only rarely overlapped. Pung retired from the LPGA tour in 1964, with five career wins but without a major. She remained in the game as the director of golf at Mauna Kea Beach Hotel and later Waikoloa Village Golf Course, both of which are on the Big Island. Widely referred to as “Hawaii’s First Lady of Golf,” she died in 2017, at age 95.

Rawls, a Texas native, became the LPGA president in 1961 but kept competing for more than a decade after that. She retired in 1975, with four U.S. Open titles among her eight majors, and 55 professional career wins.

Despite the unusual way it concluded, Rawls’ victory at Winged Foot is not one she reflects on any more often than the others.

“I was pleased with the way I played, I admired the way Jackie conducted herself, and I was proud of the USGA for enforcing the rules,” Rawls says. “But it’s not something I ever give much thought to, unless someone comes around and asks me about it.”

Why Tiger Woods' parking-lot arrival had Twitter freaking out

Adam Scott on Bryson: 'I thought he was going to be even longer'