How one 15-year-old girl went from a beginner to the U.S. Women’s Amateur in just three years 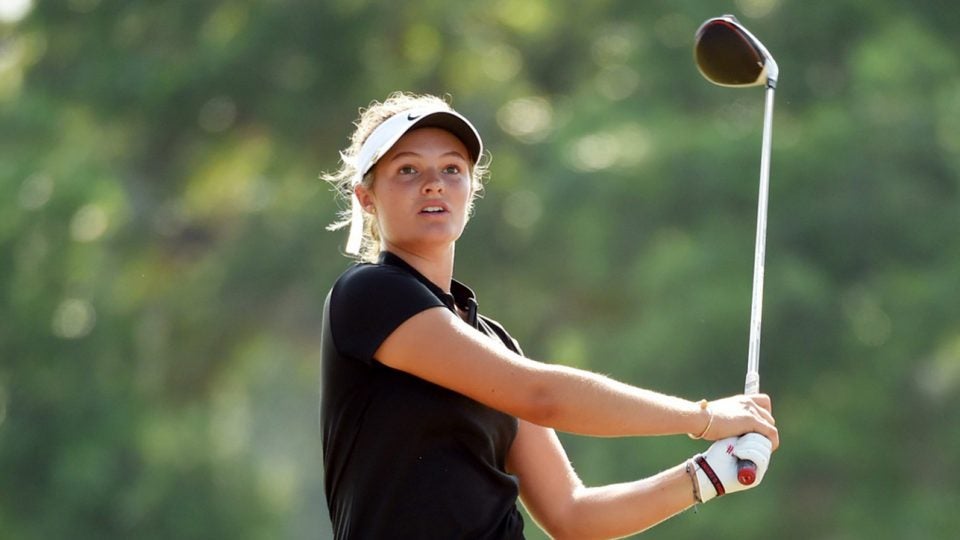 Paris Hilinski picked up golf at an older age than most amateurs.
USA Today Sports

The majority of amateur golfers have been playing and learning the sport their entire lives, but 15-year-old Paris Hilinski is not like other amateur golfers.

The La Quinta, Calif., native started playing the sport just three years ago, and now she’s teeing it up at the U.S. Women’s Amateur at Old Waverly Golf Club in West Point, Miss., this week. Oh, and she even played in the U.S. Women’s Open at the Country Club of Charleston last June, too.

Hilinksi had always been into sports as a kid, such as surfing and soccer. She still surfs whenever she’s home, but she decided to pick up golf at the age of 12 in order to have something to enjoy with her dad, John, who is an avid player.

“She came to me one day and said, ‘I’d really like to try golf and come out to the range and get a few lessons,” John says. “I don’t know how much she enjoyed it at the beginning when you struggle to make good contact.”

Features
7 lessons from the new U.S. Junior Am champ that your kids can learn from

But as she practiced more she got better, and soon Hilinski fell in love with golf. It all came together for her when she finally beat her dad.

“Most of what I’ve liked about golf is the competitive aspect,” Hilinski says. “I’ve like always been super into sports and competing and it was one sport where it had the mental and physical sides. I just thought it was really cool.”

Her typical practice regime consists of two or three rounds per week, but she admits that, due to how late she came to the sport, she has to create her own on-course simulations. Her fellow competitors have dozens and dozens of valuable tournament rounds to fall back on. She doesn’t.

“She just dedicated hours and hours and hours of her life, like four to six hours on the range just trying to make contact with the center face of the club,” John says. “It’s amazing to watch because the drive and the will to play a game like golf can be very difficult.

“When I look back at when she first started playing, I would say that it is her dedication to practice that has allowed her to really get to this level so quickly,” he continued. “And then the difference maker is going out and playing in these tournaments and the ability to block out the enormity of the situation. She’s beyond her age when it comes to her ability to block it out.”

Last year was Hilinski’s first competing in amateur tournaments, and she’s played in a half dozen so far this season. She earned her first amateur win at the 2018 LoneStar Girls Invitational, but things really began to take off this past spring when qualified for the U.S. Women’s Amateur Four-Ball Championship. While she and her partner failed to advance to the match play portion, it was just the start for Hilinski.

She then went out and took part in sectional qualifying in Pittsburgh for the U.S. Women’s Open and finished as first alternate. On the Sunday before the tournament she received a phone call from the USGA: She was in the field.

“It was nerve-wracking,” John says. “It was just exciting and overwhelming at the same time, and then the realization hits you that you have to go play.”

Hilinski, the second-youngest player in the field, missed the cut at the U.S. Women’s Open (83-81), but her father says it was an amazing learning experience.

“She’s able to reflect back on that U.S. Women’s Open and say, ‘Okay, listen, that was hard. Nothing’s like that,'” he says. “It taught her to be prepared every time she goes off to play. Whether she plays well or not, she wants to be prepared.”

Last month, at a sectional qualifier in Brockton, Mass., she earned one of the four spots available for this week’s U.S. Women’s Amateur. The 64 best scores following 36 holes of stroke play on Monday and Tuesday advance to the match play format over the last five days of the tournament. Hilinski believes she can make some noise if she can make it through to match play.

“I’m really excited because all I’m trying to do right now is to get into match play because it’s one of my favorite ways to play golf,” she says. “I do it all the time at home and I just can’t wait for the event. If I did get into match play, I could make it really far.”

Did someone say #USWomensAm?! 1-under 70 to punch my ticket to Mississippi! Can’t wait @USGA #Nike #JustDoIt #NikeGolf #JumpMan

Hilinski’s goal is to play professionally on the LPGA Tour, and her favorite player is 2017 KPMG Women’s PGA champ Danielle Kang. Hilinski has become close with Kang, who has also helped Hilinski with her own game. This week, Hilinski will look to do something Kang accomplished back-to-back in 2010 and 2011: win the U.S. Women’s Amateur.

“She’s had an incredible run playing well enough to get into these tournaments and progressively getting better,” John says. “It’s been an amazing ride.”