‘I didn’t get off the rails at all:’ Bryson DeChambeau explains his brutal back nine 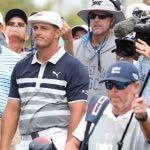 Bryson DeChambeau watches his fifth shot on the 13th hole at Torrey Pines on Sunday.

Bryson DeChambeau, playing the par-3 8th at Torrey Pines on Sunday, hit his tee shot to within 2 inches, tapped in for birdie and he held the final-round U.S. Open lead all by his lonesome. He’d par 9 and 10. Standing on the 11th tee, he was seven holes away from defending his championship.

One slip, one shirtless fan, one ball next to a Stella Artois box, one hosel rocket, two bogeys, a double bogey and a quadruple bogey later, he tied for 26th. It was just golf. But a lot of it. DeChambeau played his last eight holes at eight over. Before the 11th, he hadn’t made a bogey since the 12th hole on Friday. Then he made four bogeys or worse.

“People will say I did this or did that, and it’s just golf,” he said afterward. “I’ve had plenty of times where I hit it way worse than today and I won. It’s just one of those things where I didn’t have the right breaks happen at the right time. I could have easily gotten to seven, eight under today. I just wasn’t fully confident with the golf swing and just got a little unlucky in the rough and a couple other places.”

Here’s how DeChambeau went from five under and leading the U.S Open by a stroke — to finishing at three over and nine strokes behind winner Jon Rahm:

DeChambeau hits his tee shot right of the green, he can’t get up and down, and he makes his first bogey since the back nine of the second round. (He played bogey-free on Saturday.) He’s now four under.

DeChambeau hits his tee shot into the right rough, hits the green in regulation, then three-putts from 66 feet. He’s now three under and three shots out of the lead. Over the four rounds of the tournament, he played holes 10, 11 and 12 at six over.

On his tee shot, DeChambeau’s right foot slips backward, and his ball heads to the left rough. “Lucky to make contact with the ball,” analyst Gary Koch says on the NBC broadcast.

He hacks out of the rough on his second shot. Before his third, a shirtless fan ducks under the ropes, dances in the fairway and stunningly hits a shot before being tackled by officials — then DeChambeau hits into a bunker.

From there, he hits his fourth shot over the green, it lands next to an empty Stella Artois beer box, he takes a drop and eventually finishes with a double-bogey seven. He’s now one under and four shots back.

“I slipped twice on 13. I mean, that was really weird,” DeChambeau said. “I don’t know what happened. But that’s the game. I’ve got to be better at not slipping because I’ve done it before but never to that extent. Two times in a row on the same hole, it was kind of weird.

“Put myself in a bad place, and then I hit it up — we had a bad line, and hit it in the right rough, and you just can’t be there and you’re dead. Ultimately then there was a streaker that came around, and I had no idea what happened with that. I’m just glad an officer clotheslined him. That was fun. Then took him down and got him out like he should be.

“Unfortunately, had bad break after bad break happen. I played two little shots next to the green, both weird lies, both trying to get cute with them and messed up on 13.”

DeChambeau hits his drive into the penalty area left, takes his penalty and a drop, then hits his third to just above a bunker left of the green. From there, with his right leg in the sand and his left out, DeChambeau rocketed his ball out, he’d take two more shots to get on and two putts to finish with a quadruple-bogey 8. He’s now three over and nine shots back, which is where he’d finish.

“Seventeen, I hit a great second shot — well, third shot, and the ball just spun too much,” DeChambeau. “The wind died down and it landed short and came back off of that front edge into a really, really bad lie. I tried just chopping it out, and I caught the hosel just from a weird line.”

To his credit, DeChambeau answered six questions from reporters. The last being:

You’re actually very pragmatic now, but at least for some of us, it would take a long time to shake this off. How long do you think it will take you?

“Right now, I don’t even care,” he said. “People think that — I’ve changed a lot, attitude-wise and everything. It’s frustrating in the moment when it’s happening, but afterwards for me now, I don’t really care as much.