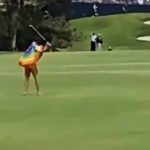 The back nine at the U.S. Open descended into fill-blown chaos, highlighted by a rogue fan running down the 13th fairway.

Chaos has descended upon Torrey Pines.

At one time early on the back nine, roughly 10 players were within sniffing distance of the lead. It felt like a déjà vu of the 2020 PGA Championship, with any number of winners looking likely to emerge from the pack.

And then in a wild stretch, everything came crashing down. The leaders in the world began looking like the weekend warriors that walk the fairways of Torrey Pines every weekend rather than the best players in the world, seemingly in an instant.

Rory McIlroy made a mess of 11 and 12. Collin Morikawa ejected himself from the tournament with a sloppy double at 13. Mackenzie Hughes fired a ball that got stuck in a tree at No. 11. Bryson DeChambeau started making bogeys left and right. And Brooks Koepka stumbled into the clubhouse with a bogey at the last. But still, the strangest was yet to come.

As DeChambeau and Scottie Scheffler walked down the 13th fairway, a shirtless fan ducked under the ropes and began prancing down the fairway. Clad in a rainbow cape and with a golf club in hand, he dropped a ball on the turf and even hit a shot. It was full-blown madness. Former major winner Rich Beem got the sequence on camera.

The perp was eventually apprehended, but not before putting on quite a show for the fans at Torrey Pines.