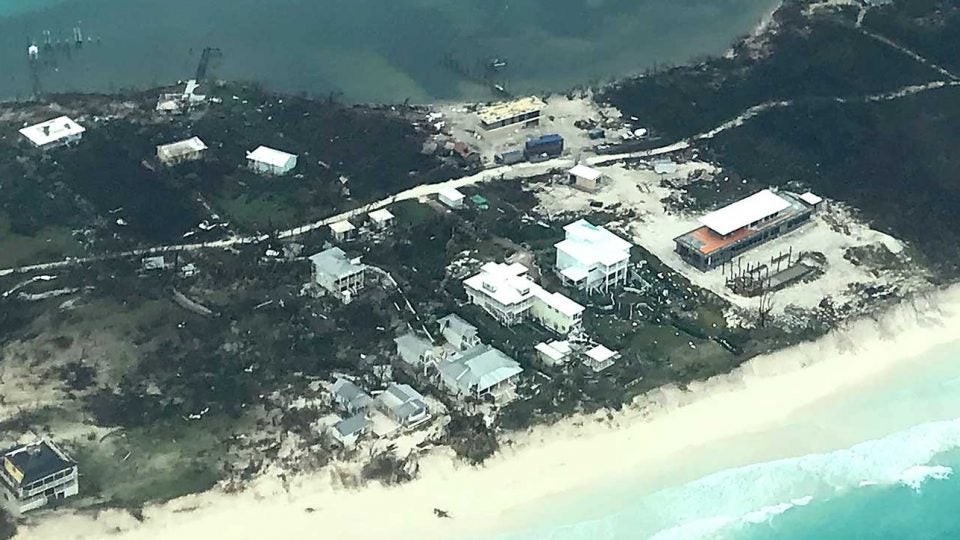 The Bahamas island of Abaco was among the hardest hit. Abaco is home to Baker's Bay resort (not pictured), which has a Tom Fazio course.
Getty Images

In the wake of any natural disaster, golf is never forefront on anyone’s mind.

But the game is part of life in the Bahamas, and so it was on Thursday that golf courses and resorts across the Caribbean country began their reckoning with what Hurricane Dorian has wrought.

Although a full account is far from complete, this much is clear: The storm did not unleash its damage uniformly. More than 700 islands make up the Bahamas, and while some of those islands escaped relatively unscathed, others have suffered catastrophically. The death toll in the Bahamas was 20 as of Wednesday evening, and officials have warned that it is likely to rise.

Among the hardest hit locations was Great Guyana Cay, an islet in the Abaco islands, in the northern Bahamas, that is home to Baker’s Bay Golf & Ocean Club — a course known to many golf fans as the site of Rickie Fowler, Jordan Spieth and Justin Thomas’s Instagram-famous spring break getaways. How the course and its infrastructure had fared in the hurricane was uncertain as of Thursday morning, but aerial images of the islet have shown homes reduced to kindling, tree limbs shredded and entire neighborhoods under water.

“At this time our focus is on providing essential relief for the people of the Abacos, including our employees at Baker’s Bay,” a spokesperson for Discovery Land Company, which developed and owns the club, told GOLF.com. “We are concentrating on arrangements for evacuations, medical aid, drinking water, food, shelter and funding for relief from the disaster.”

With phone and Internet service down in many locations, detailed damage reports have been hard to come by. But for golf-course owners and operators, their properties have been the least of their worries.

“We are extremely concerned about the safety and well-being of our staff members and other residents of Abaco,” David Southworth, founder and CEO of Southworth Development, said in a written statement. An affiliate of Southworth’s company owns The Abaco Club on Winding Bay, on Great Abaco, another island subjected to Dorian’s full fury.

The club, which hosts the Korn Ferry Tour’s annual Bahamas Great Abaco Classic, has launched a fund-raising campaign to help with disaster relief for Great Abaco residents. (Contributions can be made here. )

On its deadly, curling path across the Bahamas, Dorian generated heavy rains and sustained winds of 185 miles-per-hour that were all the more destructive because the storm itself moved so slowly. Among the popular destinations it stalled over was Grand Bahama, the northernmost island of the Bahamas. Grand Bahama is home to three courses, the most prominent being the Robert Trent Jones Jr.-designed Reef Course, at the Grand Lucayan Resort. Earlier this week, as Dorian abused the island, the resort transformed itself to a community shelter, providing a haven for more than 400 displaced island residents.

“For the safety of our guests and staff, the Grand Lucayan is closed until further notice due to Hurricane Dorian,” a message on the resort’s website now reads.

We extend our deepest love, full support and prayers to all those enduring the devastating impact of the storm.

As the heart of Dorian battered the northern Bahamas, the storm’s extremities slapped islands farther south, sparing them the worst of the harm. In the Exumas, a cluster of 365 cays and islands, Sandals Emerald Bay and its namesake Greg Norman-designed layout were unscathed. A resort spokesperson said that the property was working through the Sandals Foundation to support hurricane relief efforts. The same was true on New Providence Island (which is made up of Nassau and Paradise Island), where the Ocean Club Golf Course at Atlantis, which has a water-lined Tom Weiskopf course, and the Baha Mar Resort, home to the Jack Nicklaus-designed Royal Blue Golf Club, were largely unaffected by the hurricane. Both resorts and their courses remain open.

Atlantis is working with the Bahamas Red Cross and famed chef José Andrés and his World Central Kitchen to deliver food and supplies to Abaco, Grand Bahama and other areas. (You can make a donation to the relief fund here.) The Baha Mar is doing likewise through the Baha Mar Foundation. “From everyone at Baha Mar, we extend our deepest love, full support and prayers to all those enduring the devastating impact of the storm,” a resort spokesperson said in a statement.

Another marquee property on the island is Albany, the luxe retreat where Tiger Woods hosts his annual Hero World Challenge. Reached by email, Albany’s director of golf, Lemon Gorospe, told GOLF.com that all of the club’s facilities, including its Ernie Els-designed course, had emerged from the hurricane undamaged. Both Woods and Els have homes at Albany, as does Justin Rose, who has made the club his primary residence since 2014.

Some rough weather for us at home in Nassau but we are safe, our thoughts are with those whose homes have been devastated in Abaco and Grand Bahama by the 185 mph winds. 🙏 for everyone’s safety.