Memorial Tournament live coverage: How to watch round 4 on Sunday 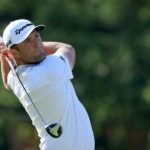 Jon Rahm leads heading into the final round of action at Muirfield Village.

We’re headed into the final round of play at the Memorial Tournament. Here’s everything you need to know for Sunday at Muirfield Village.

In the “Live Under Par” era of the PGA Tour, Rahm’s 69-67-68 to open the weekend would typically be hardly worth noting, but the second consecutive weekend of PGA Tour play at Muirfield has proven itself anything but a traditional Tour setup. The 25-year-old Spaniard was one of only two players at Muirfield to break 70 on Saturday — an accomplishment he admitted was hard-earned.

“Today could be one of the best rounds of golf I’ve played in my life,” Rahm said after the round. “It’s unbelievable, and it’s hard to believe how passively it came compared to how I play usually. It’s a great learning curve for me, as well.”

How to watch the Memorial Tournament round 4 on TV

The final round of play at the Memorial Tournament will be split between a pair of broadcast networks. Golf Channel will kick things off on the air from 1-3:30 p.m. ET, while CBS will take over from 3:30 p.m. ET through to the conclusion of the tournament.

How to stream the final round of the Memorial Tournament

Those with a cable subscription can stream all the action through NBC Sports Gold and GolfChannel.com. For the late window, coverage will also be available through CBSSports.com. Fans can also view live action all day long through PGA Tour Live, though you will need an account to access the stream.