‘I could have reached and got it and ran:’ Young Rory nearly stole from Tiger Woods 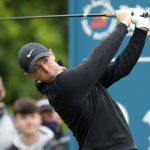 Rory McIlroy hits his tee shot on Saturday on the 2nd hole at Mount Juliet Estate.

It was there as a 13-year-old from Northern Ireland snuck under the ropes to stand no more than a pitching wedge away from his idol.

“The last time I was on the 18th green here was during the prize ceremony when Tiger won, and I remember I somehow sneaked my way, like, under the rope onto the back of the green, and I was standing right behind him and his glove was still in his back pocket,” Rory McIlroy shared earlier this week ahead of the Irish Open. “And like I could have reached and got it and ran; it would have been a good story to tell him, but I obviously didn’t.”

It’s a good story nonetheless. From there, of course, Woods would win 48 times on the PGA Tour, including seven majors. Mount Juliet would host the 2004 WGC-American Express that McIlroy also attended — “I remember being in the clubhouse and stuff and meeting Ernie [Els] after he won” — and the course in Kilkenny is this week’s Irish Open home.

And McIlroy would join Woods on the Tour, win 27 times internationally, including four majors — and wear a white glove that he, this week at least, drops in his left back pocket.

“It was the first time I ever watched Tiger play live,” McIlroy said of the 2002 tournament. “I remember the first shot I ever saw him hit was a drive off the 5th hole, the par-5, and he hit a 2-iron into the green. It was really cool. I idolized him growing up and to actually see the man in the flesh was pretty exciting. …

“But yeah, really good memories coming down here watching. It’s amazing that it’s been 17 years, and the tournament hasn’t been back since. Glad to be back, and certainly a lot’s changed in the last 17 years since the last time I was here.”

Indeed. This week, McIlroy is playing his first Irish Open since 2018, and, because of the pandemic, his first tournament in Europe since the Alfred Dunhill Links Championship in late September of 2019. Entering Sunday’s final round at Mount Juliet, he’s tied for 48th, after rounds of even-par 72, 67 and 73.

In two weeks, he’ll play the Open Championship at Royal St. George’s. At the other majors this year, he missed the cut at the Masters, tied for 49th at the PGA Championship and tied for seventh at the U.S. Open, and in May, he broke a year-plus winless drought with a victory at the Wells Fargo Championship.

“Hopefully I’ll have a good day tomorrow and shoot a good score,” McIlroy said Saturday. “My iron play is pretty good. I hit a couple of bad tee shots today that cost me four shots. … So I need to sort of just try to figure that out.”