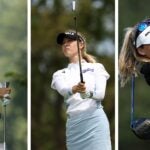 When I took a look at the 10 best men’s golfers under the age of 25 a couple of weeks back, I was most surprised by how many young stars had already hit the quarter-century mark. Jon Rahm? Cameron Champ? Haotong Li? All 25.

In the women’s game, my reaction was the exact opposite. Lexi Thompson, who is celebrating a decade as a pro, just missed qualifying for this list (she turned 25 in February). Like with Thompson, you’ll see some of the names below and marvel at the careers they’ve already had. So let’s get to it! In honor of this week’s ANA Inspiration, here are the 10 best women’s golfers under the age of 25.

Charley Hull is unfortunately out of this week’s ANA Inspiration after testing positive for the coronavirus. She has played just three times in 2020, which means we’re leaning somewhat on history here — but there haven’t been all that many LPGA events in 2020, period, so plenty of these are inevitably based on history anyway.

Hull, you’ll recall, joined the Ladies European Tour as a teenager — seven years ago! — and caught fire, logging three consecutive runner-up finishes immediately after turning pro. She was the LET Rookie of the Year in 2013, became the youngest-ever Solheim Cup competitor that same year, and then won LET Player of the Year in 2014 and ascended to the game’s top echelon.

In recent years, Hull’s career has hit a slight lull, but it’s been a lucrative, consistent, proper lull, one that has kept her hanging around the edge of the world top 25. She won an LET event last season and added a runner-up finish at the CME Group Tour Championship last fall. Here’s hoping she makes a speedy recovery and regains that sort of form this season.

Lydia Ko probably — nay, definitely — belongs higher on this list, but for once in her career lets take the pressure and spotlight slightly off the New Zealander. Like Hull (but more so!) Ko entered the game’s top echelon as a teenager. In Ko’s case, her meteoric rise to stardom saw her arrive at world No. 1 before she’d even turned 18.

Ko’s accomplishments are well known. After a storied amateur career (which included two LPGA wins), she turned pro — and it’s hard to even know what statistic to cite to underline her brilliance. She made her first 53 LPGA cuts. She won her first major at age 18 when she shot a final-round 63. She won the next major after that, too. She won three times in 2014, six times in 2015, five more times in 2016.

But there’s good news — or signs of good news, at least. Ko has showed some fight in the 2020 season, including a T2 finish at the Marathon Classic (where she led by five on the final nine and led by one going to the 72nd hole). One last reminder: she’s only 23 years old.

Hye Jin Choi has won a boatload of tournaments on the Korean LPGA Tour, where she makes most of her starts, but she’s had international success, too. The 21-year-old won the 2015 World Junior Girls Championship and owns a series of runner-up results on the LPGA Tour, including a T2 finish at this year’s ISPS Handa Vic Open.

Choi won’t be at this week’s ANA Inspiration, so we won’t see her in action at Mission Hills. But that hardly means she’ll be idle; since golf’s return to play post-quarantine, she has played in eight KLPGA events and posted seven top 10s.

Some surprise major champions use their victories as springboards to stardom. Others win just their lone major; that’s all there is to it. Which category will Hinako Shibuno fall into? We don’t know yet.

It might feel like a while ago, but it was just last year that Shibuno captured the hearts and minds of the golf world when she made her first start outside of Japan at the Women’s Open. She left with the trophy.

“Smiling Cinderella,” as Shibuno is known, didn’t immediately take advantage of the additional playing opportunities after her victory. Instead, she continued to play on the JLPGA, notching another victory last fall (her fourth of the year).

Thus far, 2020 hasn’t been Shibuno’s year — she’s missed three cuts in three starts — but she will be teeing it up at this week’s ANA in search of a sequel to her Cinderella story.

[Editor’s note: It has come to my attention that there are two No. 7s in this post. Rather than correct it and pretend it never happened, I’d prefer we all appreciate it as a quirk of the story and embrace the fact that 11 talented players made the top 10. Truly a win-win!]

The majority of this list is comprised of golf’s equivalent of can’t-miss prospects, but Hannah Green fits a slightly different mold. That’s not to say she wasn’t talented; she showed her ability when she took the Symetra Tour by storm, winning three times in 2017 to earn Rookie of the Year honors and her LPGA Tour card. But Green arrived at the 2019 Women’s PGA Championship relatively unknown; she was outside the world top 100 and had only seriously contended once on the LPGA Tour, at the previous year’s Australian Open in her home country.

But everything changed when Green poured in a five-footer for par at Hazeltine to claim her first win, her first major championship and a spot in her country’s golf annals. When she won a second event later last year — the Cambria Portland Classic — it validated her place near the top of the women’s game.

Green, 23, would still like to work her way into more frequent contention (besides the wins, she’s never finished better than T10 in an LPGA event) but there’s no doubt she’s got the game to do exactly that.

We’ll forgive you if you laugh out loud recalling that we first became aware of Ariya Jutanugarn in 2007 — and that she still hasn’t turned 25. That’s right; Jutanugarn became the youngest player to qualify for an LPGA Tour event when she played her way into the Honda LPGA Thailand at just 11 years old.

Now? It’s surprising seeing Jutanugarn this far down the world rankings, given she was arguably the sport’s steadiest performer from 2016-18. Over that stretch, she captured 10 victories, ascended to World No. 1 and generally established herself as the force on tour. But thus far, 2020 has been a bit of a wash. Jutanugarn has more missed cuts (one) than top 20s (zero), a trend she’ll try reversing this week in Palm Springs.

After her win, Lee6 spoke of her lifelong desire to play golf on the LPGA Tour, and to play in big-money events in the U.S. to help support her family. After moving as high as No. 4 in the world last season, she has played exclusively on the KLPGA since the coronavirus pandemic hit the U.S. She has finished runner-up in her two most recent starts, but won’t be at the ANA this week, either.

Brooke Henderson is yet another member of this list who has been a big-time star far longer than her age would suggest. Let’s take a walk down memory lane to Henderson’s breakthrough to the LPGA Tour. First, she turned pro for a Symetra Tour event — and she won it. A month later, she finished T5 in the U.S. Women’s Open. A month after that, she Monday qualified into the Cambria Portland Classic. She won that event by eight. Only then did she get LPGA Tour membership. And only a month after that did she turn 18.

Henderson has been relentlessly consistent since that breakthrough. She won twice in 2016. Twice in 2017. Twice in 2018. Twice in 2019. She became the winningest Canadian golfer of all time, men or women, with her ninth LPGA title. She won her national open in an unforgettable scene on the 18th green. Henderson has played just twice since golf’s restart — MC and T49 — but we’d be shocked if she doesn’t regain her form sooner rather than later. Even since she won one of her country’s major championships as a 16-year-old amateur, Japanese superstar Nasa Hataoka has been a force in women’s golf. After establishing herself on the JLPGA, she carried her success seamlessly to the LPGA Tour and to the very top of the pyramid.

Well, not completely seamlessly — in Hataoka’s first full year on the LPGA Tour, she missed more than half her cuts. But since she found her footing in 2018, she’s notched three victories and an impressive six runner-up finishes. That sort of consistent contending is a recipe for success.

Last year, Hataoka climbed as high as No. 3 in the world. She hits the ball plenty far (No. 51 in driving distance), she hits a ton of greens in regulation (73.7%) and gets the ball in the hole (No. 5 in scoring average). Like other stars on this list, she hasn’t found contention since returning from golf’s coronavirus hiatus, but she’s looking to do so this week in California.

Minjee Lee does just about everything well. She hits it far enough, hits a ton of greens, chips and putts it well and has a knack for finding the top of the leaderboard. The Australian 24-year-old was another childhood phenom, winning prestigious amateur events near home when she was just 14 years old and eventually ascending to the top amateur spot in the world before turning pro in 2014.

Since turning pro, Lee has continued to find success. She’s won five times on the LPGA Tour — once in 2015, twice in 2016, once in 2018, one more time last season. Surprisingly, she hasn’t won this year but has recorded four top-6 finishes in seven LPGA starts. That’s how she’s climbed inside the top 5 in the world again — although she’s still chasing that No. 1 crown. Speaking of which…

Nelly Korda isn’t just the top-ranked golfer on this list. She represents the next wave of great American golfers on the LPGA Tour. Since early 2019, when Korda won the Australian Open in particularly impressive fashion, she and World No. 2 Danielle Kang have established themselves as regular contenders on tour.

Korda now owns three LPGA victories and a whole slew of top-3 finishes. In a less tangible way, she seems to own that X-factor that gets her into contention and propels her forward when she’s there; she gives off the vibe of a fearless competitor.

How does Korda do it? With a certain amount of aggression. When she’s on, she’s pounding driver, riding a streaky putter and making a bunch of birdies. If that sounds like an exciting game to watch, well, it is. Coming off a T14 at the Women’s Open and a T3 showing last week, Korda’s game seems to be rounding back into form for this week’s ANA.

We wouldn’t recommend betting against her.