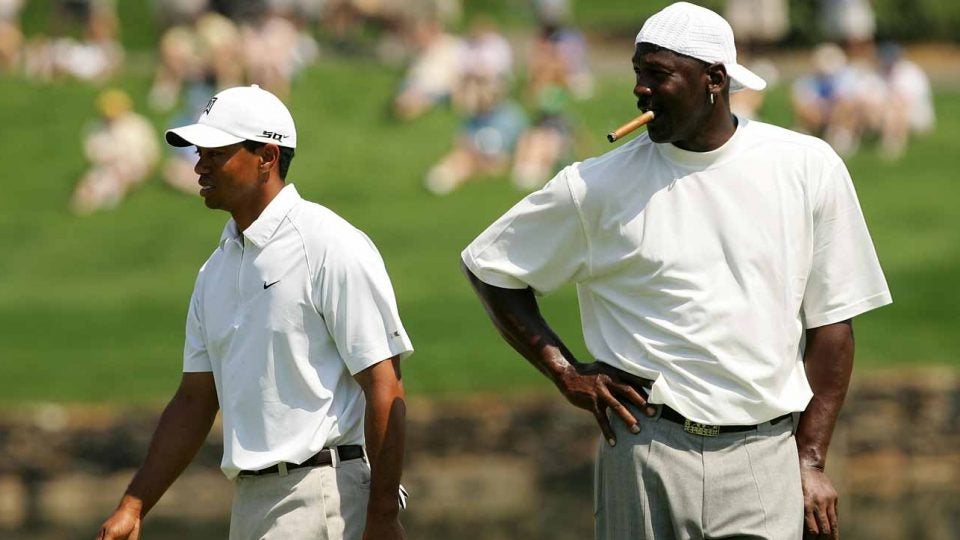 Welcome to a bonus episode of the Tiger Woods YouTube Project, where we’ll rewind a couple years from our last stop at the 2000 Memorial to explore the origins of a legendary friendship between Woods and Michael Jordan.

Tiger Woods makes it sound simple. But how it happened is really a testament to Woods’ self-belief from an early age.

We first heard Tiger Woods compare himself to Jordan in an interview at age 14, when he suggested he might end up being bigger than Jack Nicklaus. “I might be sort of like a Michael Jordan in basketball, something like that,” he told TransWorld Sport in 1990. That in itself was wild. Woods was 14! In addition to the fact that he’d barely started high school, Michael Jordan wasn’t even fully Michael Jordan yet. There are ridiculous levels of foresight here.

When Woods turned pro some six years later, he immediately had something else in common with Jordan: the swoosh on his gear. To hear him tell it, Woods’ Nike deal made his would-be friendship with Jordan that much easier. He explained during a sitdown interview with Oprah Winfrey how the two became such close friends.

Woods explains that he reached out to the basketball legend, thinking he was tracking on a similar path. Bold? Yes. Wrong? Definitely not. Here’s how he describes it:

“I guess my association with Nike did help that. But Mike’s in position where I think my life is going. And I went through some problems, I didn’t know how to handle certain situations. Like dealing with visibility, loss of privacy, articles, just people in general, and Mike helped me out because Mike has already been there.

“He’s established himself as probably the best basketball player that’s ever lived, and he’s so well-known that what better person to relate to me than not a movie star, celebrity or anything like that but a guy who’s down to earth, who’s an athlete, who can relate to another athlete. And Mike is almost like my big brother right now.”

The two remained close for over a decade, playing golf together or hanging out socially — often in the company of Charles Barkley. They shared a fierce competitive spirit and an obsession with greatness. In 2001, Jordan wrote an article for ESPN the Magazine about Woods.

“Look at his record,” he wrote. “If he’s got a lead, he keeps it. If he needs a big shot, he makes it. And the more he does it — the more he comes through when he has to — the more confident he is he can do it again.”

He added this, about Woods and confidence:

“Tiger’s confidence is so high because of his work ethic and his past success. And he performs the way he does in the clutch today because he has such confidence. If he wants to hook it around the damn tree, he’ll do it. The rest of us don’t have that confidence, or that past success, so when we hook the stupid ball, it hits the tree.”

The two hung out often in private and occasionally at joint appearances, like at the 2007 Wells Fargo Championship (then the Wachovia):

Jordan became increasingly enmeshed in the world of professional golf, from charity events to money games to his presence at nearly every U.S. team golf event.

“We can relate on so many different levels,” Woods said after the pair played together in 2007. “Not too many people have gone through the same things we’ve had to go through, and he actually did it first. So because of that, I’ve been able to basically cherry-pick all the knowledge that he’s accumulated over the years. 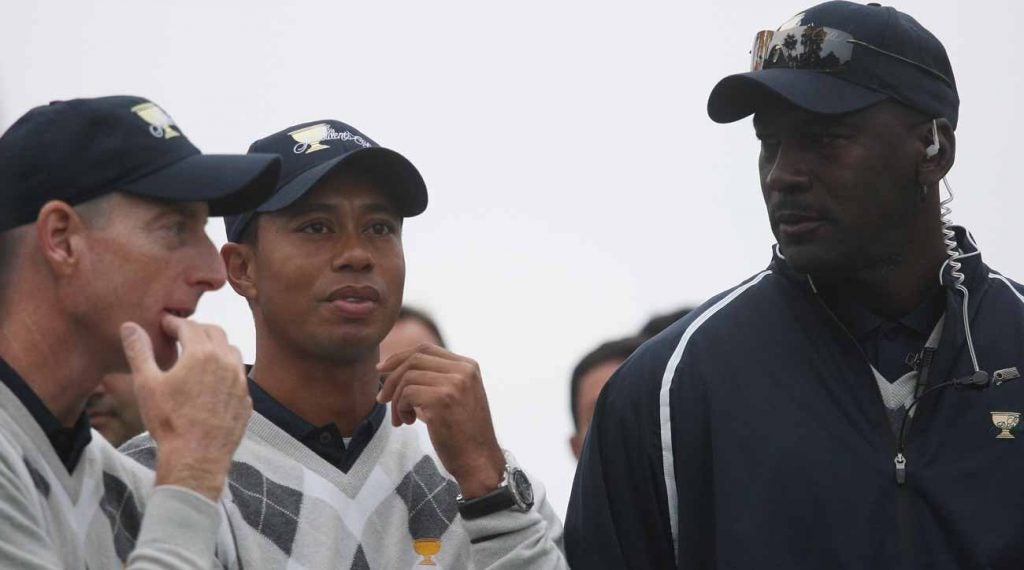 Jim Furyk stands with Woods and Jordan at the 2009 Presidents Cup at Harding Park.
Getty Image

After Woods withdrew from the public eye in the aftermath of Thanksgiving 2009, he stopped communicating with much of the outside world — Jordan (and Barkley) included. Still, the two have publicly retained a mutual affection over the years.

In Wright Thompson’s 2016 article for ESPN, Jordan offered some insight into the guilt Woods felt — and offered a dark prediction for his playing career.

“That bothers him more than anything,” Jordan told Thompson. “It looms. It’s in his mind. It’s a ship he can’t right and he’s never going to. What can you do? The thing is about T-Dub, he cannot erase. That’s what he really wants. He wants to erase the things that happened.

But when Woods completed his comeback with a win at last year’s Masters, Jordan was more than happy to say he was wrong.

He described watching the final round to The Athletic’s David Aldridge, going so far as to call it “the greatest comeback I’ve ever seen. 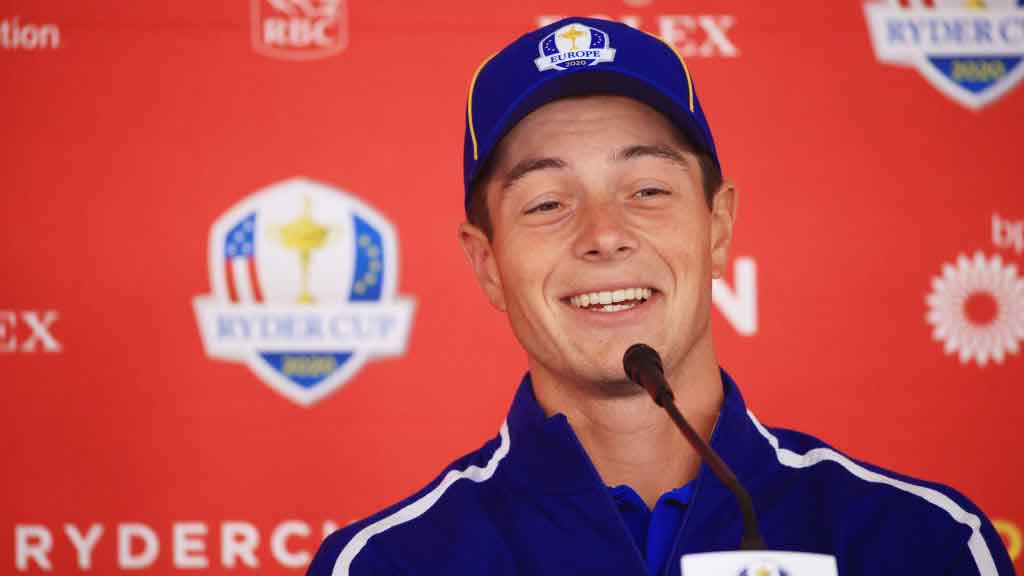 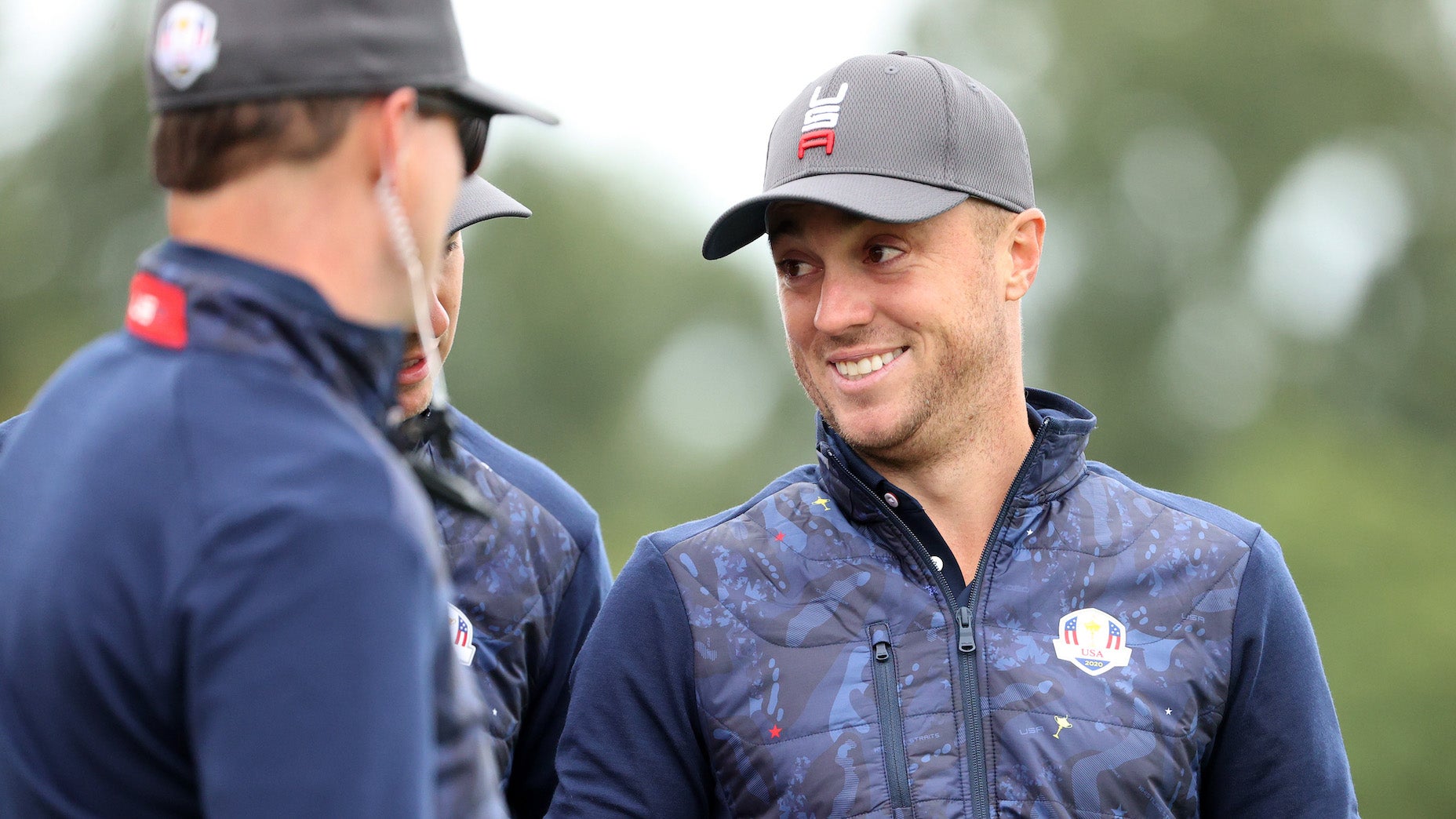 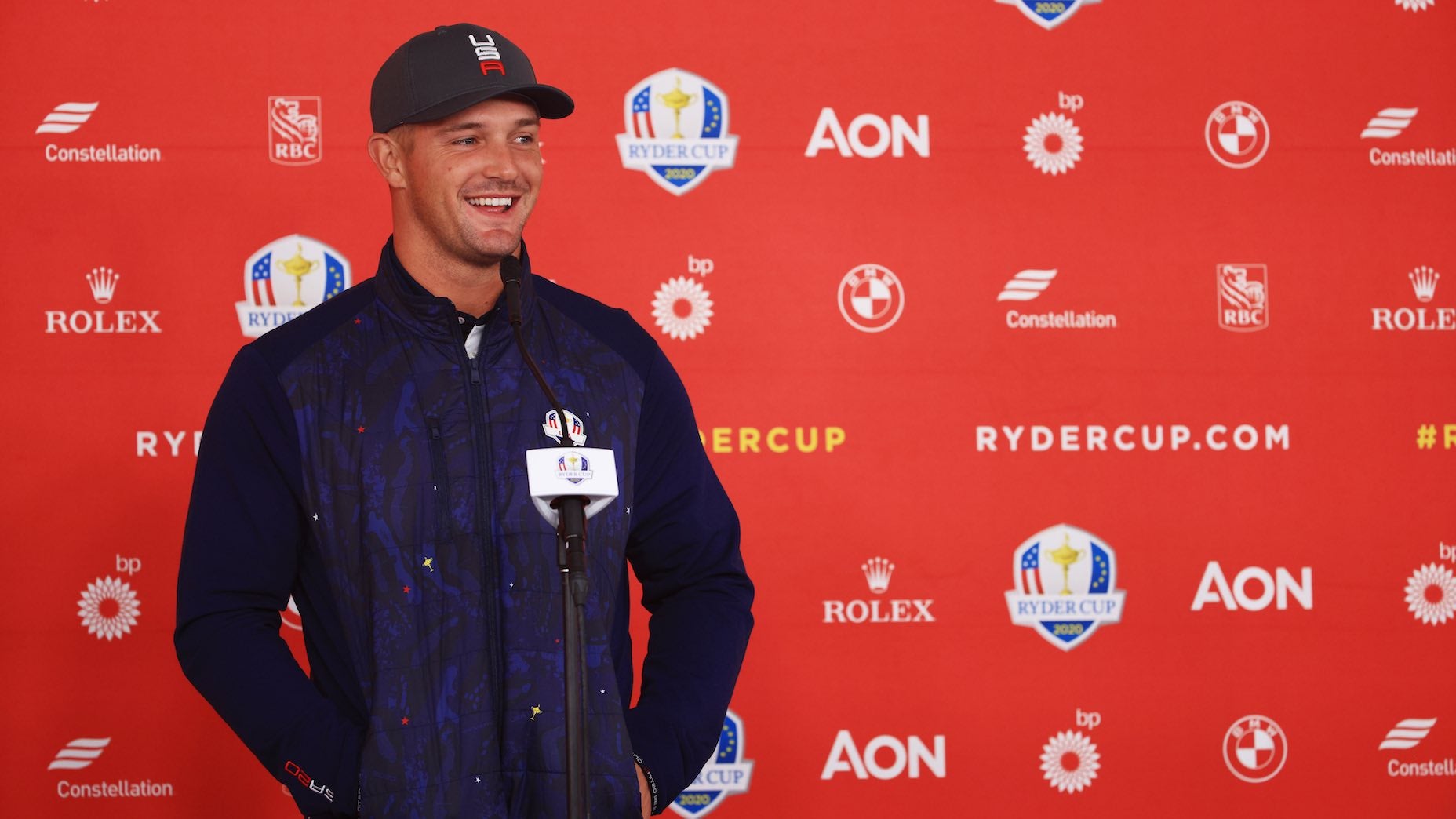 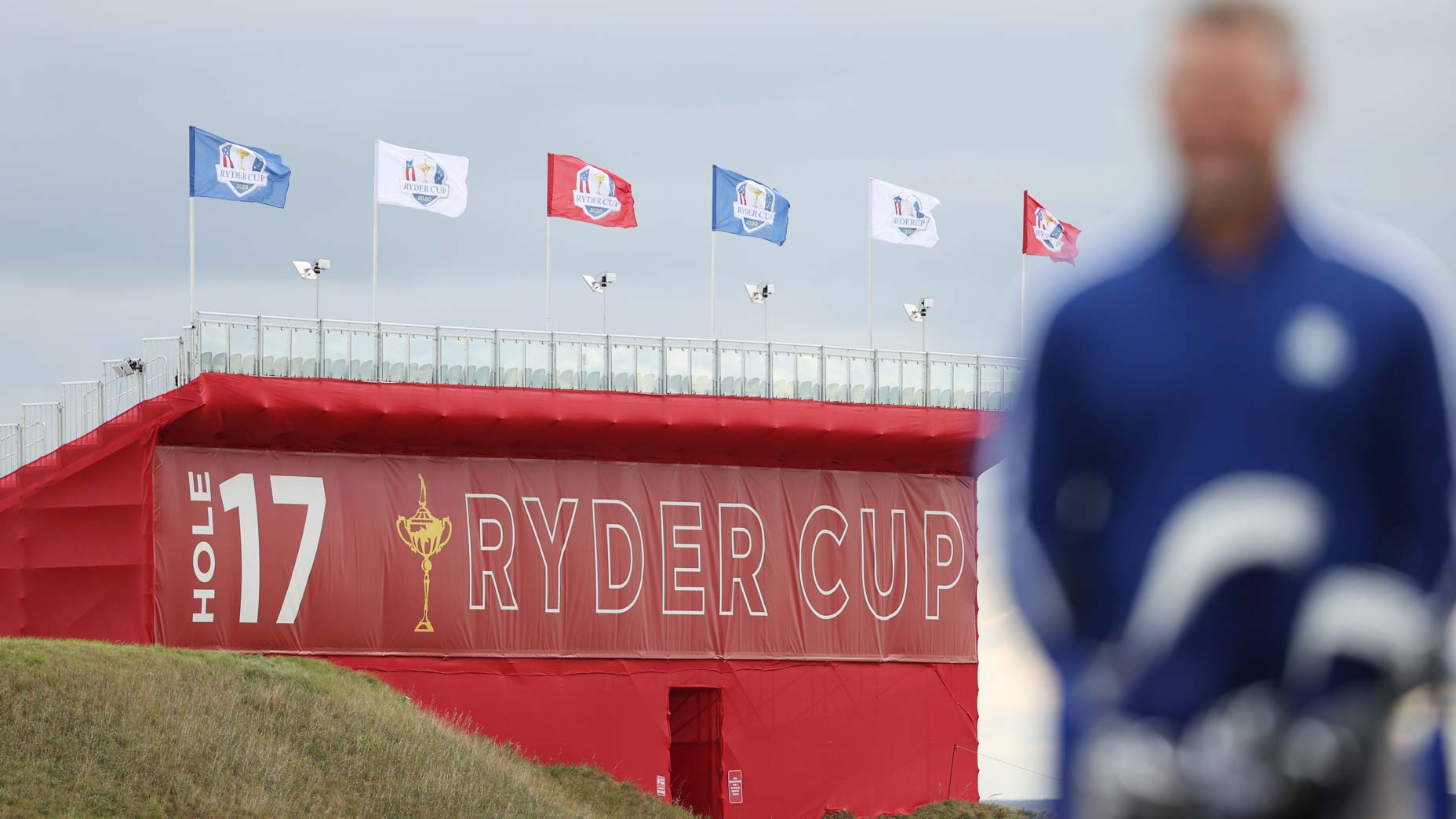 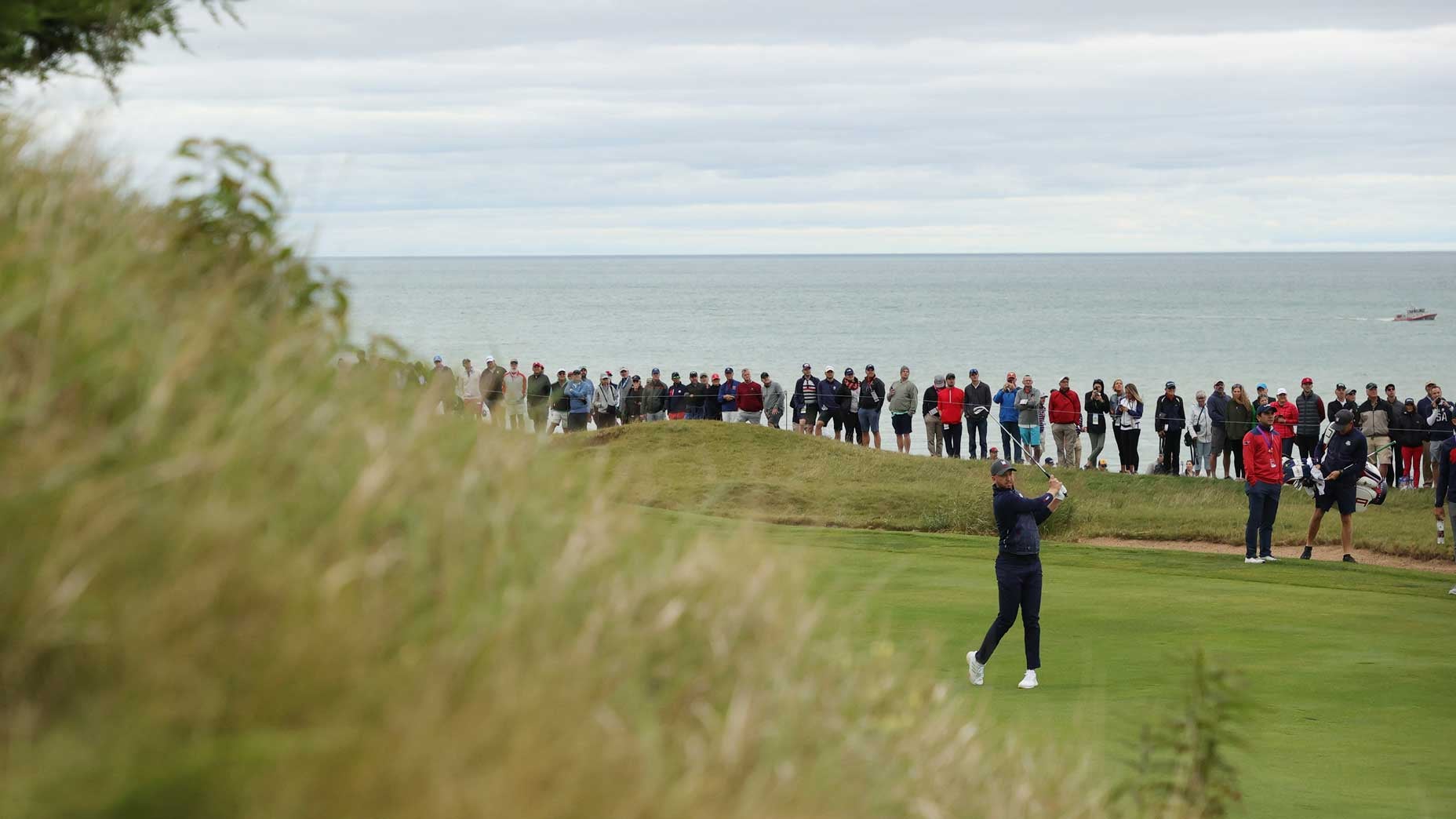