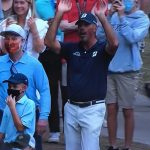 Matt Kuchar waves on fans on Saturday to help him look for his ball on the 16th hole at Austin Country Club.

Jordan Spieth is playing in his home state this week at the World Golf Championships-Dell Technologies Match Play, and on a course in the city where he went to college. Burnt orange Texas hats and shirts are in the gallery at Austin Country Club, and Spieth has plenty of support.

His people helped his opponent on Saturday.

Matt Kuchar, during his round of 16 match with Spieth, hit his second shot right and into the trees and deep grass on the 555-yard, par-5 16th. As he neared the area, Kuchar waved fans to go inside the ropes and look for his ball. When a marshal tried to stop them, Kuchar continued to wave.

“Well, Kuchar’s done a very smart thing,” analyst Jim “Bones” Mackay said during Golf Channel’s broadcast. “What he did here, in hopes of finding his second shot is ask about 40 or 50 people from the gallery to join the search.”

“He’s like the Pied Piper over there,” announcer Jimmy Roberts said.

“Get by with a little help from your friends,” announcer Steve Sands said.

With about 20 seconds left in the allocated 3 minutes to search, Mackay said on the broadcast, Kuchar would find his ball. Had he not, he would have had to take a penalty and hit from his previous spot, according to Rule 18.2 b. And conceivably lose the hole.

Kuchar would get rules help, too. A scoreboard, about 50 yards ahead of his ball and just to the right of the green, was in his line of sight, and he was able to take a drop to the left, according to Model Local Rule F-23, for temporary immovable obstructions. From there, Kuchar punched out to about 25 yards short of the hole, and he and Spieth would halve the hole.

Kuchar would win the match on 18, he’d win his quarterfinal, and he’s playing in Sunday’s semifinals.

“Just incredible,” Mackay said on the broadcast. “Lucky to get the relief that he got given where his second shot went, but that’s golf.”