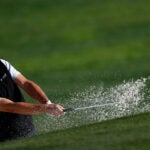 Steve Stricker hits out of a bunker on Friday on the 2nd hole at TPC Scottsdale.

Steve Stricker, during Thursday’s first round of the Waste Management Phoenix Open, took a long look at the leaderboard near the 18th hole at TPC Scottsdale. He’s the U.S. Ryder Cup captain, and Americans were in contention. Friends were, too.

A familiar face was fifth.

“Oh, I love to watch who is playing well and look for potential players on the Ryder Cup team, friends, how they’re playing,” Stricker said Thursday. “Just see — get the lay of it. I study it a lot, it seems like nowadays, just trying to get a feel for what’s going on and how guys are playing.

“That’s nothing new. It was good to see my name up there on the top, and the challenge will be to come out tomorrow and try to keep that ball rolling.”

That ball kept rolling Friday, and Stricker kept rolling. Let the good times roll. He’s 53, less than a month from 54, and should he win, he’d become the PGA Tour’s oldest winner. (Sam Snead was 52 when he won the 1965 Greater Greensboro Open.) Stricker followed up his six-under 65 in the first round with a five-under 66 in the second, and he’s one stroke behind Xander Schauffele, who took the lead with a birdie on 18.

“I haven’t been in this position for quite some time out here, and obviously on the Champions Tour a few tournaments here and there where I’ve won or been in contention, but yeah, this is why we’re here, to play at this stage, at this level,” Stricker said. “So it felt good to get in there and to start the way I did today, this morning.

“I played really solidly to start the day and I got under par on that opening stretch, which is a good stretch when it’s so cold in the morning. And I hit some quality shots. That gave me some confidence going forward.”

Stricker hasn’t won on Tour since 2012. But he made the cut at last week’s Farmers Insurance Open. And he tied for 17th at the Mayakoba Golf Classic in December. Then Thursday and Friday, in a fun grouping with European Tour Ryder Cup Captain Padraig Harrington and fellow Wisconsinite Jerry Kelly, Stricker made 13 birdies and just two bogeys. He’s second in the field in Strokes Gained: Putting and fifth in SG: Around the Green.

Stricker, never one of the longer hitters on Tour, was 118th in the field in driving distance on Thursday, and 128th on Friday. He won’t pop it 350. Nor does it appear he needs to.

“These guys, they all hit it 300 plus, 320s, 330s, and I’m just trying to get it in the fairway and get it up to 280,” Stricker said Thursday. “So the game has changed. I know if I can do my thing and roll the ball like I did today, not get too crazy and try to stuff it when I have a long iron in my hand or something like that, I can do all right.

“It’s harder, but I enjoy the challenge. Last week, I enjoyed that challenge. It’s the biggest course we play out here, and I made the cut. Had one bad round, but did some really good things.”

Toward the end of his press conference, he was asked what a victory would mean. To do something that’s never been done before. To take a long look at the leaderboard on Sunday. And see his name at the top.

“Yeah, it would mean a lot,“ Stricker said. I mean, I know it’s a long shot. I’ve got to play my very best, just like anybody else does out here. But you know, I’ve been there. I’ve won a few times out on this Tour, and I know what it takes, although it’s been a while. It would be fun to see how I handle it if I do get that opportunity.”