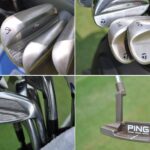 Interesting equipment finds abound when you have a field loaded with stars. Having spent the last three days stalking the Southern Hills range and peeking inside staff bags, I somehow managed to narrow down my snaps to 7 pieces of gear that stood at the 104th PGA Championship. Take a look at what’s trending.

Lost in the shuffle of Tiger Woods adding TaylorMade P770 long irons to the bag this week was an equally important gear change that few gearheads noticed. That would be Woods’ transition from TaylorMade’s Milled Grind 2 wedge into the Milled Grind 3 the week of a major championship.

As you’d expect with one of the most meticulous golfers on the planet, every change has a purpose. In Woods’ case, he found the grass to be on the stickier side — in other words, the Bermuda grass around the greens is particularly grainy this week — which required a few modifications to the sole and leading edge.

By increasing the bevel and reducing the bounce on the back edge, the leading edge was raised without making the wedge sit higher at address. Raising the leading edge should make it easier for Woods to get the wedge through the turf this week and not have to worry about catching it heavy.

Ping’s PLD putter line has been making waves since it was introduced on Tour. With the PLD custom program and PLD Milled now available to the masses, Ping is continuing to find new ways to expand the matrix, including the addition of two new finishes that are on site at Southern Hills for feedback purposes.

Ping Tour rep Dylan Goodwin pulled off the headcovers to reveal new “Glazed Donut” and “Oyster” finishes. The “Glazed Donut” might be the best putter finish name on Tour. And before you bemoan the addition of two new Tour-only looks, Goodwin confirmed both will be available through the PLD putter program.

Scott Piercy remains the Lead Tape King, but Beau Hossler is coming for the crown. Hossler, who was spotted using a carry bag this week, had a set of Titleist 620 CB Forged irons with lead tape completely concealing the cavity badging. Lead tape can be used to achieve a certain feel or flight.

In Hossler’s case, he uses the tape to achieve a combination of both, preferring the slightly heavier feel to go alongside his preferred launch window.

As I stood next to the practice putting green on Tuesday afternoon, I spied Hideki Matsuyama’s staff bag overflowing with drivers sporting different Graphite Design shafts. We’ve seen Matsuyama carry a multitude of putters during practice rounds. But it’s also not uncommon for him to have at least four or five drivers in tow during a practice round.

With the wind expected to blow at Southern Hills, it’s very likely Matsuyama is testing different profiles to find a driver that can handle the weather conditions. It’s a savvy move for a pro who’s in tune with his gear.

Before Bryson DeChambeau withdrew on Wednesday afternoon, I snapped some photos of his clubs while he went through a rigorous putting session. The setup hasn’t changed one bit since we last saw Bryson at the Masters, but it was still fun to snap photos of his 58-degree Artisan Prototype wedge.

The slab of lead tape on the back — designed to help lower launch — and DeChambeau’s logo situated on the toe give it some character. Wedge stamping is commonplace on Tour, but you rarely see a pro add their logo to the scoring tools.

Billy Horschel’s Titleist 620 MB irons have a similar look to the retail version — with one exception. The number stamped on the bottom of each head has a different look. When Horschel first put the irons in play after turning to the free agent route, he needed the heads bent so much — a whopping 4 degrees strong — that Titleist had to change the number on the head to ensure there wasn’t any confusion.

His 8-iron became his 7-iron, his 7-iron became his 6-iron — you get the idea. Making significant modifications to the loft on an iron head — anything beyond 2 degrees isn’t advisable — will typically create a negative chain reaction that affects how the club goes through the turf. In Horschel’s case, he didn’t have to sweat the loft change with Titleist’s Tour team making the sole adjustments. Some alterations are best left to the professionals.

Dubbed the “Oil Capital of the World,” it seems fitting that Scotty Cameron would create a headcover for the PGA Championship featuring a roughneck, oil derrick and black Circle-T oil spots.

Cameron rarely misses the mark when it comes to his special-edition major headcovers. This one is no different.