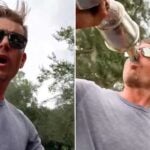 Henrik Stenson performs the "Dreams Challenge" with the claret jug.

When Henrik Stenson captured his first and only major championship title in a dramatic duel with Phil Mickelson at the 2016 Open Championship, he knew it would be a career highlight. He probably didn’t know it would help him create a viral video (at least in the golf world.)

Stenson is the latest Tour pro to take a shot at the “Dreams Challenge,” a viral video challenge that began with one man on TikTok and snowballed into millions of videos and memes across the internet.

For those not in the know, the “Dreams Challenge” simply involves filming a close-up of yourself riding a skateboard (or any number of wheeled devices) and listening to Fleetwood Mac’s “Dreams” while lip-syncing along with Stevie Nicks and, most crucially, taking a big swig from a bottle of Ocean Spray Cranberry Juice.

If you read that and thought ‘this is stupid,’ you’re not wrong. But it has become a legitimate international sensation. The first golfy version we witnessed was from pro Harry Higgs, who swapped out the skateboard for a golf cart in his video.

Higgs is a natural in front of the camera and gets lots of points for style. But Stenson took it to another level with his key use of what he calls the “best drinking utensil.”

What “drinking utensil” you ask? The Claret Jug, the seemingly ancient trophy awarded each year to the winner of the Open Championship. Whether cranberry juice can damage an old silver chalice like the Claret Jug is a question for a different kind of expert, but for those worried about the trophy’s condition, you’ll be happy to know that Open champions receive a replica of the Claret Jug to keep permanently when they win, not the real thing.

Check out Stenson’s challenge video below.

Rickie Fowler: Why Michael Jordan is so hard to beat at MJ's new course