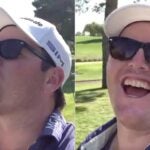 Harry Higgs gets in on the #DreamsChallenge.

If you weren’t aware of what TikTok’s “Dreams Challenge” was until now, well, that makes two of us. But Harry Higgs helped inform me so here I am to inform you.

To sum: A TikTok user uploaded a video of himself blissfully rolling down the road on a skateboard while “Dreams” by Fleetwood Mac played in the background. He then took a big swig of cranberry juice straight from the bottle and sang along with the tune. The post went viral, and so did a challenge for others to copy.

Celebrities, athletes and influencers joined in, and now so has Higgs, who has gained a cult-like following on the PGA Tour. The 28-year-old Everyman — with his trademark unbuttoned polo, shades and cheery disposition — radiates a carefree style many golf fans have fallen in love with.

Naturally, he seemed like the perfect fit for the #DreamsChallenge. The PGA Tour thought so too, and its video of Higgs joining the challenge has already been viewed a half million times in just 12 hours. It’s easy to see why.

Still want more Higgs in your life? He tees off at 3:55 p.m. ET on Thursday alongside Danny Lee and Doc Redman for the first round of the Shriners Hospitals for Children Open in Las Vegas.