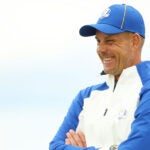 Stenson will be the first Swede to captain a Ryder Cup team.

After months of consternation within its ranks, Team Europe has its new Ryder Cup captain. Henrik Stenson will lead the European squad at the 2023 Cup in Rome.

The 45-year-old Swede played in five Cups himself and then pivoted to a vice captain role in this past year’s Cup at Whistling Straits. “I am extremely proud and humbled to be @RyderCupEurope’s next captain,” Stenson tweeted Tuesday morning. “Rome, here we come!  #RyderCup #TeamEurope”

Much had been made over the delayed announcement by Team Europe. Decisions about the next captain typically take place early in the new year. Padraig Harrington was announced Jan. 8, 2019. But the reported issue at hand was the same one bothering much of the rest of the PGA Tour: the Saudi-backed golf league.

It was reported that Stenson was considering committing to the Saudi golf league, and that he (as well as Ian Poulter) had been warned they would never be able to captain a Ryder Cup team if they committed to the breakaway league.

“It’s a heck of a decision,” one member of Stenson’s team said to James Corrigan of The Telegraph. As a result of the indecision, it appeared Luke Donald would be next in line to take over the captain role. Harrington himself, as well as many others asked to talk on the record, endorsed Donald as a great option. But nothing was set in stone.

At the end of February, Harrington even kept the conjecture flowing when he told reporters that he was specifically told to not discuss who was being considered for the role.

It was during that week in late February that Stenson admitted to sitting down with the European panel for what he called “somewhere between a job interview and a school presentation.” Stenson said the decision was expected for mid-March, and on the exact middle day of the month, here we are. He will be the first Swedish player to captain a Ryder Cup team.