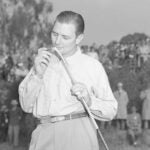 Harold McSpaden finished runner-up a lot. Thirteen times in one season, to be exact.

Hideki Matsuyama’s win at the Zozo Championship will hang around with us, the pro golf collective, for quite some time. He won by five, in his native Japan. It’s a big deal. Twelve months from now, when pros travel to Japan again, we’ll remember it fondly.

What we won’t remember is who finished second.

Cameron Tringale backed his way into a tie for second with Brendan Steele, halfway across the globe while Americans were fast asleep. That podium — Matsuyama, Tringale and Steele — felt right. Hideki is the best player. The runners-up just aren’t bonafide winners. But those second-place finishes are a bigger deal in the golf world than we often give credit for. (Tringale is on the verge of a Masters invite now as a result.) They don’t always have to be an indictment on a player’s ability to win, like we so often treat them. The bedrock of Louis Oosthuizen’s phenomenal career is a bunch of second-place finishes. Twelve of them, to be exact. All of them in the years that followed his first and only Tour victory, an Open Championship.

If you called Oosthuizen ‘Mr. Runner Up,’ no one would stop you. But in order to be the GRUOAT (Greatest Runner Up of All Time), he’s still got work to do to catch Harold McSpaden.

McSpaden, a Kansas man who died in 1996 at 87 years old, is the original Mr. Runner Up. He went by one of the best unexplained nicknames in golf: Jug. He is a member of the PGA of America Hall of Fame but not the World Golf Hall of Fame. That distinction, of course, matters a lot. And it likely comes down to the fact that he finished runner-up a lot. Thirteen times in one season, to be exact.

Mr. Jug’s epic 13-time runner-up season came in 1945, a very famous PGA Tour season. That’s when Byron Nelson famously won 18 times in 30 starts, and 11 times in a row. Everyone from Arnold Palmer to Tiger Woods to Jordan Spieth has been asked to opine on the absurdity of an 18-win Tour season. The consensus is obvious: no one will ever match it. Two wins, these days, is good enough to be nominated for Player of the Year.

While Lord Byron was lifting all those trophies, he was casting a shadow over our man Jug. McSpaden finished second to Nelson seven times that season, including three times in a row. He finished second that season to Sam Snead, Ben Hogan and Henry Picard. This was war-time and the biggest names who weren’t fighting overseas were gobbling up the trophies on the American golf circuit. And one name was gobbling up all the silver medals.

Jug never competed for the Claret Jug, so his major count was restricted to the Masters, U.S. Open and PGA Championship. You won’t be surprised to hear that his best finish in those was a runner-up finish at the 1937 PGA, held at Pittsburgh Field Club. One thing we know to be true of our favorite runners-up, particularly the modern ones, is that sometimes they seem consumed by the moment, and everything surrounding it. Nevermind that Jug bogeyed the 34th hole and double-bogeyed the 35th hole to blow his two-up-with-three-to-play lead — what mattered most was the 36th hole. Jug had played his way to a 4-foot birdie putt for the win on the 18th hole. Suddenly, things got very real. From that week’s Youngstown Daily Vindicator:

“Taking past performances into consideration, “Jug” ordinarily would pocket such a shot easily. But on this occasion the pressure was terrific. McSpaden clearly showed its effect as he nervously addressed the ball in view of 5,000 breathless onlookers. Suddenly his composure was shattered by the grinding of movie cameras. McSpaden walked away from the ball and pleaded with the officials to order the cameras stopped. The request was granted, but McSpaden was badly shaken. He missed the putt and with it his best chance to dethrone the quiet-spoken Boston professional.”

That’s how McSpaden lost the PGA Championship: Bogey, double bogey, missed 4-footer, and eventually a missed 8-footer on the first playoff hole. Without that PGA victory, McSpaden presents us — those who care deeply about hall of fame admittance — a fascinating case. Because for all his next-best finishes, McSpaden earned plenty of respect from the people who beat him. In part because he was always there, but also because he won 17 times. But it was fitting that the one victory he did notch in 1945 came in a two-man better ball event in Miami. His partner, unsurprisingly, was Nelson. Some players just seem destined to be a running mate rather than the leading man.

The two were great friends, often competing in fourball events together. They were among the first made-for-TV golfers, too, pitted in many newsreels made during World War II as “The Gold Dust Twins.” And to McSpaden’s credit, he made Nelson runner-up one time, beating him in a playoff at the 1944 Phoenix Open to earn an extra $250.

Though the history books will never look too kindly on him, McSpaden’s takeaway from his career was perfect. In 1995, just months before his untimely death, he told Nelson simply, “If you wouldn’t have been born, I would have been known as a pretty good player.”