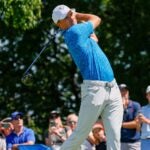 Jordan Spieth is in contention for his second victory in 2022 at the Byron Nelson.

After three days, we’ve finally reached the final round of play at the 2022 AT&T Byron Nelson. Below, find everything you need to know to tune into Sunday’s final round action from TPC Craig Ranch in McKinney, Texas.

For Jordan Spieth, the timing is nothing shy of serendipitous. The 28-year-old enters the final round at the 2022 AT&T Byron Nelson firmly in contention — trailing by just a single stroke behind Sebastian Munoz in what is a de facto home game at TPC Craig Ranch. A victory on Sunday would be Spieth’s second this year, and third since breaking his years-long drought in early 2021. But it’d also be a victory in the final event before the PGA Championship — a springboard carrying the three-time major champ into Southern Hills on a high.

Spieth (-20) and Munoz (-21) will serve as two-thirds of the final group on Sunday, but they’re far from the only notable names in contention. Trailing closely behind those two is a group headlined by Joaquin Niemann (-19), Justin Thomas (-18) and Scottie Scheffler (-16). With the four of Spieth, Niemann, Thomas and Scheffler figuring to make up a chunk of the most-watched names at next week’s PGA, Sunday will be key in getting a final glimpse of their game before the second major of the year.

Below, find everything you need to know to tune into Sunday’s final round at the Byron Nelson, including TV and streaming schedules, and tee times.

How to watch the AT&T Byron Nelson on TV

How to watch the AT&T Byron Nelson online, streaming

The best way to watch the 2022 AT&T Byron Nelson online is with PGA Tour Live on ESPN+. PGA Tour Live will stream extensive coverage of the event from 8 a.m.-6 p.m. ET on Saturday and Sunday, in addition to featured group coverage. Sign up for an ESPN+ account here to start streaming.

How to bet on the AT&T Byron Nelson